New Pulp Author Bobby Nash’s newest BEN Books release, FRONTIER, a collection of pulpy sci fi and space opera themed stories is now available as an ebook for Kindle and Nook. It is also as a paperback from BEN Books direct, which can be found here. Paperbacks will be available from Amazon and Barnes and Noble within a week.

Frontier collects 9 sci fi short stories from Bobby Nash, author of Earthstrike Agenda, Evil Ways, and Deadly Games! Some of the rare tales presented in Frontier are reprints and others are in print there for the first time. The stories that make up Frontier happen on Earth, on alien planets, and in the deepest recesses of space. There’s action, adventure, horror, and even a little romance. 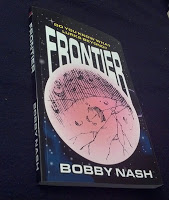 SAMARITAN
In deepest space, a research vessel rescues a survivor who asks to be returned home. The catch: her planet lies at the center of a black hole.

DREAMWEAVER
Nathanial “Doc” Dresden wakes up in space, free floating above the moon. But he is not alone.

WHERE HAVE ALL THE MONSTERS GONE?
Nathanial “Doc” Dresden and his team investigate bizarre happenings.

MIDWAY
A meteor storm damages Midway station, a museum storage facility and frees an ancient creature from its icy tomb.

JUST ANOTHER SATURDAY ON OUTPOST 9
When war breaks out between neighboring worlds, the Outpost 9 space station is caught in the crossfire. Dr. Erin Moonshadow tries to save lives as chaos reigns around her.

THE DROP
War. Ground troops are dispatched. Dropped from their starship, the troop transport is attacked and one of the soldiers is lost. Then things get strange.

NIGHTMARE IN AMBER
Are a young man’s dreams of an interstellar war a product of his imagination or a prophecy of things to come?

THE GARDEN
A survey crew discovers a veritable Garden of Eden. Is this paradise or is there a serpent in hiding, waiting to strike?

A JOURNEY INTO MYSTERY
A one-page story that was doubled as an advertisement for a convention where Bobby was a guest. A fun experiment.

Illustrations in Frontier are by Bobby Nash and Jeff Austin.

The author shares the contents of the book as well as an essay on the making of the book on his website. You can read Bobby’s thoughts on Frontier here.