Samaritan by Bobby Nash is a novella set in the future where man is exploring space aboard prospector ships. The Aquarius is one such ship. The Aquarius has been out in deep space for eight long years and is just now returning to Earth. In all that time they have not encountered another being of any species. That is about to change.
When the ship comes upon a seeming graveyard of spaceships and spaceship parts the crew is understandably curious and excited. For the first time they have evidence of life on other worlds. Sadly, as they are about to find out, it’s better off not answering certain questions, at least not at this time.
This is a VERY well written space adventure, and within its forty plus pages an entire story is told, and nothing is left wanting. I really liked this one a lot, even more than I expected too. It held my interest and the pace which started out slow built to a frenetic crescendo at the tales end. This is as much a horror story as it is Sci-fi, in the vein of ‘Alien’.

But therein lies the problem with this tale, to me at least. The end, while excellently and professionally written, felt a little too expected for me. The big surprise was pretty much what I expected to happen.

But do NOT let that deter you from reading this story. It honestly is one of the best things I’ve read in a long time. There’s very little sci-fi out there that I like. Most of it reads like bad Star Trek or Star Wars. Or it strives far too hard to be neither. This just read like a good sci-fi story. I’ve been lucky recently and read three good sci-fi stories in a row, including this one. You can’t go wrong here. Bobby’s characters are real and you don’t like all of them, which to me is the sign of a good writer, and a good story.

Give Samaritan a whirl. It’s a short but very engrossing story. Far better than most novella’s I’ve read recently. 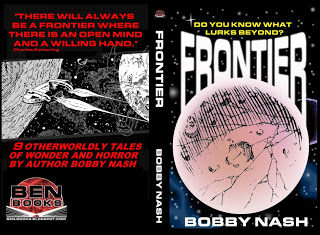 About SAMARITAN (an ebook novella by Bobby Nash):
Deep space.
The science ship Aquarius, under the command of Captain Jeremiah Rains has finally reached the end of its exploratory mission to the depths of uncharted space and is returning home to Earth.
Captain Rains and his skeleton military crew are tired and bored from the lack of adventure they expected to find out in the great beyond. The scientists, however, are extremely happy with their many discoveries.
When the ship comes upon the wreckage of a destroyed space vessel, the crew is surprised to find one survivor; a woman, quite possibly the most beautiful woman any of them have ever seen. Her name is Lari and all she wants is someone, some Good Samaritan, to take her home.
The catch is that her planet is located at the center of a black hole.
SAMARITAN is a novella by author Bobby Nash
You can learn more about Bobby Nash’s Samaritan at www.bobbynash.com and http://BEN-Books.blogspot.com.
Samaritan will be part of the upcoming BEN Books release, FRONTIER, a collection of sci fi stories by New Pulp Author Bobby Nash. Frontier will be the first time Samaritan has been in print since its original run in Startling Stories #3 from Wild Cat Books in 2007.
Share