Pulp 2.0 Press Opens up The Agent 13 Dossier
Pulp Publisher to Collect the AGENT 13 Novels by Flint Dille and David Marconi 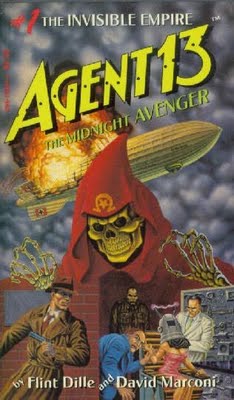 Los Angeles, CA – Pulp 2.0 Press CEO Bill Cunningham today announced that the company has signed an agreement to redesign and republish the adventures of the classic pulp character, Agent 13, created and written by Flint Dille (Transformers G1) and David Marconi (Enemy of the State). This Pulp 2.0 collector’ edition titled The Agent 13 Dossier will be exclusively in print, and will collect all three of the original Agent 13 novels as well as exclusive features disclosing the secrets behind the mysterious Midnight Avenger.

Agent 13 was originally published in 1986 by TSR in a trilogy of novels – The Invisible Empire, The Serpentine Assassin and Acolytes of Darkness. The character spawned a set of graphic novels drawn by artist Dan Spiegle (with covers by Jeff Butler) as well as a role-playing game and comic. Kidnapped as a young child in 1907, a gifted boy was brought to The Shrine, the hidden headquarters of the ancient organization known as The Brotherhood. His past memories were erased, he was assigned the title Agent 13 and trained as an assassin and agent in clandestine operations. He became the best disciple and would have risen high in the ranks of the Brotherhood, until he discovered its true evil nature under its cadaverous leader, Itsu – The Hand Sinister. Fleeing The Brotherhood he is hunted by their ninja-like agents, and begins a deadly cat-and-mouse contest against the organization. He fights back, forming his own group of allies against the Brotherhood who dare to plunge the world toward war.

“Agent 13 is Dille and Marconi’s love letter to the pulps, cliffhanger serials and comics. We at Pulp 2.0 are ecstatic to present our readers with these great pulp adventures in an exclusive collector’s print edition,” said Pulp 2.0 CEO Bill Cunningham. “I remember reading… okay devouring these books when they first came out, and I’ve always loved the world and characters that Flint and David created. To be able to design a new edition to share these rare novels and the secrets behind Agent 13 is an honor.”

“We were sitting in Flint’s living room one day, and we started jamming ideas back and forth. Flint was a big fan of the pulps and he showed me some of the old materials he had. He had a book featuring the old pulp covers that we looked at that was very inspiring. I had just written some screenplays for Warner Brothers and had good relationships there, and said that if we came up with an interesting story/pitch about this stuff, we can possibly set it up as a screenplay to write.’ So we originally developed AGENT 13 as a studio pitch to set up as a film, and spent quite a lot of time developing the story and characters as we pitched it around to the various producer/buyers around town,” said co-creator David Marconi.

“Then, when the movie wasn’t getting set up as quickly as we hoped, but the story had progressed to the level where we had all the characters and everything else worked out, we decided to just write the book. Flint had access to Random House through Gary Gygax and TSR, so we were able to get a publishing deal, and dove straight into Agent 13 novel world. Which at the end of the day, was more fun in that it allowed us to go much deeper into the characters and backstory which can’t be explored in great detail in a 2 hour script format.”

More details will be forthcoming as the project progresses. The Agent 13 contract was negotiated on behalf of the creators by Howard Bliss of Union Entertainment.

Flint Dille is a living embodiment of Transmedia. His career started by turning toys into TV Shows with G1 Transformers, G.I. Joe, Inhumanoids and Visionaries. He has designed games with Gary Gygax and written movies for Steven Spielberg. Flint has sold game design documents as feature films – Venom (Dimension 2006) and Agent In Place (Lionsgate 2010). Flint directed the interactive movie Terror T.R.A.X., Track of the Vampyre which became a television pilot for Fox as well as Dragonstrike, one of the first hybrid film projects.

Flint has twice won ‘Game Script of the Year’ (Riddick: Escape from Butcher Bay (with JZP) and Dead to Rights and was nominated for Ghostbusters and Dark Athena. He has worked on crown jewel franchises including James Bond, Mission: Impossible, Tiny Toons, Batman: Rise of Sin Tsu (Guiness Book of Videogame Records for creating the first Batman villain outside of the comics), Superman, Dungeons & Dragons, Teen Titans and Scooby-Doo.

He has a degree in Ancient History from U.C. Berkeley and an MFA from USC. Currently, Flint is teaching a class on Alternate Reality Games at UCLA. His follow up book to The Ultimate Guide to Video Game Writing and Design is about Transmedia.

A native of Highland Park, Ill., Marconi was passionate about film making from an early age. After winning several high-school film making competitions, Marconi was awarded an Alumni Merit Scholarship to attend the University of Southern California’s Film School. Upon graduation, landed his first job as Francis Ford Coppola’s assistant on The Outsiders.

Working closely with Coppola, Marconi “cut his directing teeth” watching Francis direct both The Outsiders and Rumblefish. In 1993, Marconi wrote and directed his first feature, The Harvest, (Columbia TriStar). The film premiered in the ‘official selection’ of the San Sebastian Film Festival and went on to win numerous awards in International Film festivals.

The success of The Harvest brought Marconi to the attention of Simpson/Bruckheimer who commissioned Marconi to write his original screenplay Enemy of the State (Disney) starring Will Smith and Gene Hackman. Marconi continued creating tent-pole action films for the major studios; WW3.com (which served as the basis for the Die Hard sequel; Live Free or Die Hard ) (Twentieth Century Fox,) Perfect Suspect for Chris Rock (Twentieth Century Fox,) and the high-tech., science fiction epic; No Man’s Land. (Dreamworks.)

Most recently, Marconi was a featured guest speaker for IADC, International Attorney’s Defense Council, and the Department of Defense Cyber-Crime Conference where he lectured on his film Enemy of the State and how it relates to privacy concerns and cyber-warfare in a post 9-11 world. 2011 will mark Marconi’s second foray behind the lens as a writer/director with his new feature film; INTERSECTION, a gritty thriller currently in pre-production being produced by Luc Besson, the director of THE PROFESSIONAL, FIFTH ELEMENT and Europa Corp. Holding duel citizenship for the US and EU (Italy,) Marconi divides his time between Los Angeles and Europe.