YOU BETTER WATCH OUT! DOC CLAUS IS COMING TO TOWN! 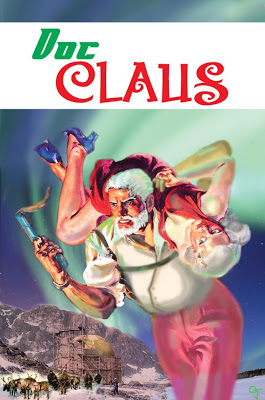 Pulp Empire has announced the release of Doc Claus in trade paperback format for your reading pleasure. Doc Clause is available at Amazon and CreateSpace. (Ebook editions coming later this week) and features a cover by Teel James Glenn.

About Doc Claus:
You may know him as the Man of Presents, but his friends know he is far more than that!

Doc Claus springs off the pages in five new adventures! With a bit of comedy and a bit of parody, our hero and his allies set out to protect the world… 364 days a year! And with the rest of the Holiday Patrol: Cupid, Easy, Remmy, Montgomery, Comet, and of course, the Missus, he may be the only defense against the most nefarious threats the world has to offer!

Buy the print edition for a mere $10 at Createspace and Amazon. Digital readers can expect digital editions just in time for Christmas!

This isn’t the St. Nick you know!