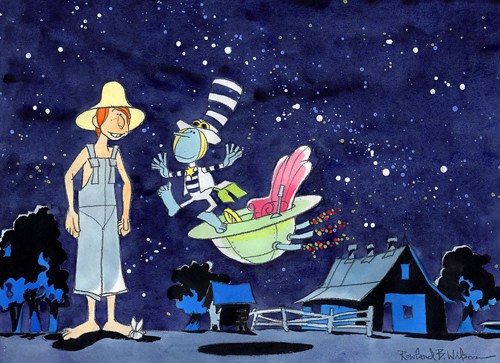 In honor of the day and time, we present this classic from Schoolhouse Rock, “Little Twelvetoes”.

Now if man had been born with 6 fingers on each hand, he’d also have 12 toes or so the theory goes. Well, with twelve digits, I mean fingers, he probably would have invented two more digits when he invented his number system. Then, if he saved the zero for the end, he could count and multiply by twelve just as easily as you and I do by ten.

Now if man had been born with 6 fingers on each hand, he’d probably count: one, two, three, four, five, six, seven, eight, nine, dek, el, doh. “Dek” and “el” being two entirely new signs meaning ten and eleven. Single digits! And his twelve, “doh”, would be written 1-0. Get it? That’d be swell, for multiplying by 12.

Now if man had been born with 6 fingers on each hand, his children would have ’em too. And when they played hide-and-go-seek they’d count by sixes fast. And when they studied piano, they’d do their six-finger exercises. And when they went to school, they’d learn the golden rule, and how to multiply by twelve easy: just put down a zero.

But me, I have to learn it the hard way.

Hey Little Twelvetoes, I hope you’re thriving.
Some of us ten-toed folks are still surviving.
If you help me with my twelves, I’ll help you with your tens.
And we could all be friends.
Little Twelvetoes, please come back home.