Rose decides to do something very emotional and foolish. The results of her actions are dour indeed, and all because she chose to have a…

“An ordinary man – that’s the most important thing in Creation”

Seized by memories, Rose asks The Doctor to take her back before her father Pete died.  He died in a road accident when Rose was only a baby, and Jackie has gone to great lengths to tell her daughter what a fine man he was.  The Doctor agrees – they attend Pete and Jackie’s wedding, where he gets her name wrong in the vows.  Rose, thinking he’d be “taller”, is already starting to suspect his story may have grown in the telling.  Asking to visit the moment Pete died, twice, she makes a horrible choice – she saves her father from being hit by the car.

She’s overjoyed, but The Doctor is livid.  He tries desperately to get her to understand the enormity of what she’s done, and she refuses.  He storms off, but when he realizes what’s happening to the world, he races to find her.  She and Pete have headed to their friend’s wedding, and mysteriously, a number of guests are missing.  Time is starting to go wrong – songs are playing on the radio that haven’t been released yet, and Rose’s phone is picking up a call from Alexander Graham Bell.

Meeting up with Jackie (and a baby Rose) at the church, it’s more apparent that the tales she told her daughter were just that.  Pete’s big plans were just dreams, and he was much more Ralph Kramden than JR Ewing.  And all around them, mysterious creatures are snipping people out of time. This moment is a wound, and the Reapers are here to pick at the scab.  As things get more serious, Pete realizes that he is not meant to be here, and is forced to make a very serious decision to make it right. 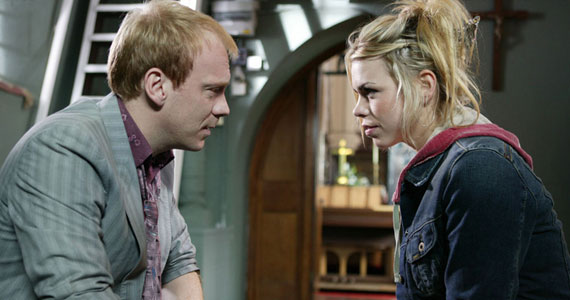 Solid acting all around, in a very serious episode, even with the moments of levity.  Pete Tyler is a character who will return in the Tennant run of the series, as part of a long-form plotline that will tie into the season finale.  While he may not have planned it from square one (as moffat appears to do) but Davies was not a stranger to the long plot.

This is the first story of the new series where time travel itself is integral to the plot.  The average Doctor Who story takes place in a single location and time; time travel is little used in the story itself.  Here, we see a number of paradoxes, and how they all affect time itself.  Moffat will do that  great deal more when he takes over the show, and of course in the classic Blink.  Using time travel is very complicated, and requires a lot of explanation to make sure the audience can keep up. The challenge is keeping things entertaining, and Paul does it here expertly.

“I can do anything” – quite a different mindset for this Doctor than for Ten or Eleven.  Ten spent a lot of time talking about how he couldn’t do things, right up until Waters of Mars, when he came to the decision that, being the last Time Lord, he can do anything he damn well pleases, a decision that bites him BUT quick.  Even Eleven comes to his “Time can be re-written” realization, causing him to take massive risks, and only luck having them come out on his side.

One of the most shocking moments of the episode is one of simplest effects in the world, indeed there’s no effect at all.  The Doctor opens the TARDIS and it’s just an empty box.  Well…yeah.  But we’re so used to it NOT being just a box that it feels so wrong.  Wonderful moment.

The costume work in the 80s is positively unsettling. from Pete’s unconstructed jacket with the rolled up sleeves to the mad curly hairdo on Jackie, it’s hilarious.  It’s nice moment of fun against the dramatic story.  And anyone who thinks that Stormageddon, Dark Lord of All is the cutest baby to appear on Doctor Who has forgotten about this episode.  The expressions captured by the director are priceless, and how they’re edited into the proceedings are hilarious.

Rose accuses The Doctor of being jealous, that for once he’s not the most important person in her life.  It’s not the case, but at the end of the day, it’s Pete that saves the day, by doing something that the Doctor couldn’t.  And that only makes Rose love him more.  And that’s a feeling that will carry through that plot thread for some time to come.