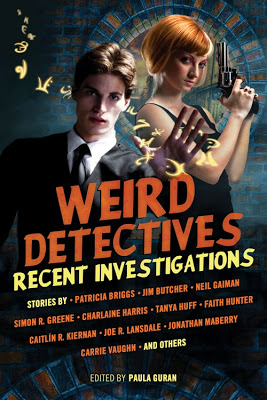 Paranormal investigators. Occult detectives. Ghost hunters. Monster fighters. Humans who unravel uncanny crimes and solve psychic puzzles; sleuths with supernatural powers of their own who provide services far beyond those normal gumshoes, shamuses, and Sherlocks can provide. When vampires, werewolves, and thing that go bump in the night are part of your world, criminals can be as inhuman as the crimes they commit, and magic can seep into the mundane—those who solve the mysteries, bring justice for victims or even save the world itself, might wield wands as well as firearms, utter spells or simply use their powers of deduction. Some of the best twenty-first century tales from top authors of the century’s most popular genre take you down mean streets and into strange crime scenes in this fantastic compilation.

Contents (alphabetical by author):
“Cryptic Coloration” by Elizabeth Bear
“The Key” by Ilsa J. Blick
“Mortal Bait” Richard Bowes
“Star of David” by Patricia Briggs
“Love Hurts” by Jim Butcher
“Swing Shift” by Dana Cameron
“The Necromancer’s Apprentice” by Lillian Stewart Carl
“Sherlock Holmes and the Diving Bell” by Simon Clark
“The Adakian Eagle” by Bradley Denton
“Hecate’s Golden Eye” by P.N. Elrod
“The Case of Death and Honey” by Neil Gaiman
“The Nightside, Needless to Say” by Simon R. Green
“Deal Breaker” by Justin Gustainis
“Death by Dahlia” by Charlaine Harris
“See Me” by Tanya Huff
“Signatures of the Dead” by Faith Hunter
“The Maltese Unicorn” by Caitlín R. Kiernan
“The Case of the Stalking Shadow” by Joe R. Lansdale
“Like a Part of the Family” by Jonathan Maberry
“The Beast of Glamis” by William Meikle
“Fox Tails” by Richard Parks
“Imposters” by Sarah Monette
“Defining Shadows” by Carrie Vaughn