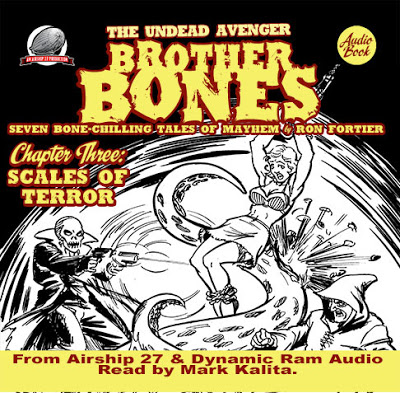 Airship 27 Productions, in conjunction with Dynamic Ram Audio, is thrilled to announce the release of their third audio recording based on the stories of the new pulp sensation, Brother Bones – The Undead Avenger by Ron Fortier. Voice actor Mark Kalita returns to read this new entry called, “The Scales of Terror.”

“I was very excited to be chosen to bring Ron’s Brother Bones stories to the audio medium,” Kalita says. “These tales are so rich in the classic pulp fiction tradition with their noir atmosphere, gritty language and larger-than-life hero that you can’t help but let yourself get pulled into the shadows of their delightfully dark recesses. Hopefully my readings will further enhance the imagery that Ron has so skillfully crafted to make them appeal both to fans of old time radio and modern audio books.”

This short audio files are part of an on-going project to sell all seven of the Brother Bones tales from the Airship 27 Productions’ prose collection for the reasonable price of $2. Once all seven have been recorded and made available, the entire audio book will be offered for the bargain price of $10. “Response thus far has been truly wonderful,” reports Fortier, who is also Airship 27 Productions Managing Editor. “We couldn’t be any happier with Dynamic Ram Audio’s quality on these recordings and Mark brings so much to the table. His readings enhance the creepiness of each story.”

There is some definitive extra passion to this reading as Kalita went on to explain. “Scales of Terror was particularly special for me to read because I’m a big fan of H.P. Lovecraft and the idea of doing a story about a secret cult and otherworldly beasties had instant appeal. Throw in Brother Bones and his particular brand of undead justice and it just doesn’t get any better. I think listeners will also find Chris Barnes’ special audio treatment really helps bring this tale an added dimension of cool creepiness.”

BROTHER BONES – Audio Tales # 3 The Scales of Terror is now available for download at http://robmdavis.com/Airship27Hangar/index.airshipHangar.html#brobonesaudio3