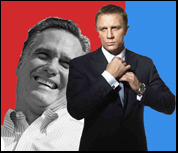 I think we can all agree at this point that the DC New 52 gambit has been a success. Whether you like or dislike some, all, or none of the offerings, you have to agree that commercially and financially it’s worked which, from DC and Warner’s viewpoint, is what they wanted.

I haven’t been keen on all the changes. For example, I think Superman not having the red trunks looks weird. Superman hooked up with Wonder Woman and not Lois is just wrong, in my book. Thing is, these are not my books and aren’t meant to be. I’m in my sixties; DC’s demographic has to be for those younger than me and more diverse than an old white guy.

In the same mode, the latest James Bond film, Skyfall, has opened to great reviews (and I really want to see this one) and, by all accounts, has paid tribute to the past while paving the way for the future. That’s smart. You keep faith with old fans while reinvigorating the franchise.

Which brings me to the recent elections. As we all know, the Republicans lost the race to the White House as well as a few House seats and didn’t get control of the Senate, which they expected to do. They were certain they were going to unseat President Obama. They’ve taken to whining about the results and some of their spokespeople, like the noted political thinker Ted Nugent, claim their guy lost because of the “takers.” (I’m hearing that often enough to make me think it’s now an official GOP talking point.) Guys, this echoes back to Romney’s comments about the 47% in that clip that probably went a long way towards losing him the election. Do you really want to hit that nail on the head again?

The idea of my giving unsolicited advice to the GOP may seem a little odd. After all, I’m a well-known liberal commie pinko who was solidly and loudly behind Obama in this race and Democrats in general. However, I was raised Republican and have several Republican politicians in my pantheon of politicians I like, such as one time Illinois senator Everett McKinley Dirksen and former Illinois governor Richard Ogilvie. I even voted for some Republicans on the local level in the last election – on purpose. I think the Republic is served better by having functioning Republican and Democratic parties. I don’t think the GOP, if it continues down the road its on, will be a major functioning political party in about a decade. Maybe less.

The GOP used to have a lot of moderate members but, since becoming in thrall to the Far Right and the Tea Party, the moderates were purged and continue to be purged. It used to be that Republicans, while having their own beliefs and philosophy, could concede here and there in the interests of getting something done. Not anymore. Now it’s all ideology and how “true” they are to Conservative Principles as defined by Fox News, Karl Rove, Rush Limbaugh, and Grover Norquist.

Mitt Romney defined what it meant to be Republican. In a time of recession and economic hardships and Occupy Wall Street, they made their standard bearer a member of the 1% and a venture (“vulture”) capitalist. At a time when the fastest growing demographic bases are minorities, they nominate the whitest white man they could find. When women are an increasingly important part of the electorate, they make a stand against abortion a part of the party platform with no exceptions for rape, incest, or the health of the mother.

The GOP might consider the examples of both DC and the latest Bond movie to see how they can reinvent and reinvigorate their brand. Yes, they might alienate some of their base but that’s always a problem when you make changes. A basic truism for comic book companies – every time you change an artistic team on a book, especially one that has been long established, you know you’re going to lose some readers. The trick is to bring in more readers with the change than you lose. The same is true politically. These days, a GOP presidential candidate has to cater to the Far Right in order to get nominated. But to get elected they have to appeal to the center which is more moderate and that’s tricky to make work without losing your base. Ask Romney. But, as DC and the Bond franchise have both shown, it can be done and, in fact, should be done every so often.

The GOP started as a radical party full of abolitionist lefties before getting co-opted by Big Business. Under Teddy Roosevelt, they were “progressives,” which is now a dirty word among Republicans. Embrace what is best from your past, welcome those who are not just old white males, and re-invent yourselves.

If James Bond can do it, why not you?