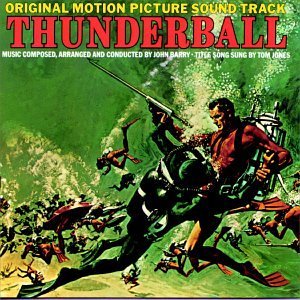 The James Bond films are a part of the American pop culture landscape.  Like another British perennial, Doctor Who, you have your favorite, but you never forget your first Bond.  And almost more so than the films’ effect on us are the film’s theme songs.  Each one is memorable in its own way, some are standards, and some are positively iconic, recognizable after only two or three notes.

With the new film, Skyfall, out this weekend, I’ve taken a listen to them all.  And after much debate and shifting about, The Management has compiled a list of fifty years of James Bond theme songs, ranking them from bottom to top.

As is true of any list like this, there will be more than a little dissent.  We invite you to use the comments section to express your opinions.  Comparisons of the author’s intelligence and/or musical taste to various species of flora and fauna will not be conducive to a spirited argument.

Certain songs, as a result of being used in numerous Bond films, or simply because they’re so awesome as they’d take up place in the top of the list, have been accorded the honor of being placed on a dais above the competition, looking down upon the battleground in the way royalty watches a fine joust with detached satisfaction.

James Bond Theme – Rather an obvious one here.  technically it is the theme from the first Bond film, Dr. No (1962), but became almost synonymous with the character. It’s appeared in every film since, and rightly so. Monty Norman could have laid his pencil down and never composed again, and he still would get to go straight to Heaven.

007 Theme – First appearing in From Russia With Love and appearing in several films since, usually as background to a chase or fight scene, it’s another John Barry masterpiece, with its high brass and percussion.

These songs are either not from the official Bond series, or in one case, was not used, but are so thematically tied to the films that they deserve mention.

Casino Royale – Not the recent Daniel Craig film, but the screwball comedy with David Niven, Peter Sellers, Woody Allen, Daliah Lavi, and in that order. With a score and main theme by Herb Alpert and the Tijuana Brass, and the classic “The Look of Love” by Mr. Burt Bacharach, it’s a chaotic jumboort of a film, as memorable as any of the main series.

Mr. Kiss Kiss Bang Bang – This theme song was originally intended to be the theme for Thunderball, but after versions were recorded by both Dionne Warwick and the grande dame of Bond, Shirley Bassey, the song was scrapped for the Tom Jones number with which we are all acquainted.  The decision was that the song needed to incorporate the title (a rule that fell by the wayside in later years, as you shall see.  Recent releases of the film’s soundtrack feature both recordings. There’s an urban legend that maintains that “Mr. Kiss Kiss Bang Bang” is the Japanese name for 007. It is from this song that both the 2005 film and the first episode of Torchwood got their name.

Never Say Never Again – The history of Kevin McClory is a long one. To summarize, he was the first person to have the film rights to Bond, helped write the screenplay that eventually became the novel Thunderball, and got writer’s credit on the novel (after a court case) and held the film rights to Thunderball until his death.  He also held the film rights to SPECTRE, which is why the organization stopped appearing in the films after that one.  He tried many times to use his filmrights, but the only successful attempt was this film, in which they got Sean Connery to trturn to the role that made him world-famous.  The song is quite good, incorporates the theme well, and come on, it’s Sean Connery as Bond again, I refuse to give anything in the film a serious dig.  Yes, EVEN the hologrammy-shocky video game.

Spy Hard – The film was one of a long series of film spoofs in the Airplane! mold, starring Leslie Nielsen.  But it’s the theme song by “Weird Al” Yankovic that we honor here.  An original song, in the style of Bond themes, particularly Thunderball (with an obvious nod to the end of Goldfinger), sung by Al, over a Bond-esque title sequence, also directed by him, his first foray into directing.

Dr. Evil theme – from the second Austin powers film, The Spy Who Shagged Me, the song, by Brooklyn’s ambassadors of love, They Might Be Giants, and performed by John Flansburgh’s wife Robin Goldwasser, is a note-perfect sendup of the “villain song” that many Bond films have featured as their main theme.

Goodbye, Mr. Bond – by Buffalo-based rock band Blotto, the song was the last tune on their third album, Combo Akimbo. Singer Bowtie Blotto took the role of the baddie who had the joy of welcoming the superspy to his “fortress retreat”.  It features a number of original but very 007-reminiscent motifs, as well as witty lyrics that you could easily hear come from any Bond villain, and probably have.