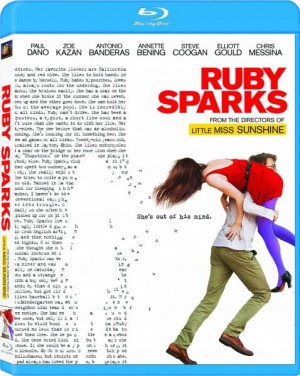 A writer’s character coming to life is nothing new. It was done effectively on The Twilight Zone and Sharon Stone even portrayed a muse come to life to bedevil Albert Brooks. As a result, the premise behind the charming Ruby Sparks is not at all fresh but the approach is what makes this small film well worth your time and attention.  That it is heartfelt and well-constructed is to be expected considering the movie comes from Jonathan Dayton and Valerie Faris who first caught our attention with Little Miss Sunshine. They have been missed.

Paul Dano is Calvin, an author who hit his first novel out of the park and has been struggling to remain commercially relevant ever since (think Jonathan Franzen). Then, finally, he creates a character, Ruby, who genuinely stirs his soul thanks to a prompt given him by his therapist (Elliott Gould). The pages flow easily for the first time in a decade. A week later, though, Ruby (Zoe Kazan) has come to life and is found sitting on his couch, ready to experience life. Ruby is 26, doesn’t own a computer and always roots for the underdog, something Calvin most certainly is.

What does one do when the woman of his dreams is made manifest? If he imagined her to life, can he or should he alter her to his exact specifications? And that is what propels the remainder of the film, a sitcom version of magical realism. Does he share her with the world, make love to her, or admire her from afar? His brother Harry (Chris Messina) says jump her after realizing she is the women Calvin has been writing about.

What starts out as a pretty funny comedy takes on serious tones as we progress and the shifting mood isn’t smoothly handled. It raises some interesting question and only partially answers them, leaving you somewhat entertained, somewhat dissatisfied. This is about Calvin growing up and we watch him flail all over the place despite a support system including his mom and his step-father (nice cameos from Annette Bening and Antonio Banderas). Calvin remains a mess, still in pain after breaking up with his last girlfriend (Deborah Ann Woll), and has a tough relationship with his lousy literary agent (Steve Coogan).

Dano and Kazan are wonderful together, ably supported by the deep, veteran cast. They rise above the film when the material gets weak or meanders but overall leave you entertained from beginning to end. This could have benefitted from a stronger script but still remains entertaining and thoughtful, not at all a bad combination.

The transfer to Blu-ray by 20th Century Home Entertainment is excellent and the disc comes with the standard assortment of special features. Most feel like they came from the press materials with little shot specifically for the disc. You get a handful of pieces ranging in length from three minutes to four minutes, never letting you delve deep into the film itself.