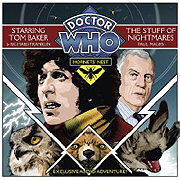 Author Thomas Wolfe told us you can’t go home again. That certainly hasn’t stopped a lot of folks from trying.

After an absence of nearly 30 years, Tom Baker finally returned to the role of the Doctor in the five-part, six-hour BBC full-cast [[[Doctor Who]]] audio play, Hornet’s Nest. The first part, [[[The Stuff of Nightmares]]], was released in Britain earlier this month
and is available from www.audible.com and www.emusic.com.

Of course, Doctor Who fans are so hard to please they make
Star Trek fans look like they’ve had a Vulcan neck pinch. So how does the most long-lived and long-scarfed Doctor hold up after such a long layoff?

First, I should point out that the story, like Baker himself, is witty, charming, horrific, and over-the-top. If you don’t like that, you probably don’t like Baker. Here’s the high concept: taxidermied animals are reanimated with the implanting of origami-like brains infested with
malevolent hornets. Actually, it’s quite an effective horror story.

The Doctor recruits his old UNIT friend Mike Yates, reprising Richard Franklin’s role, by planting an ad in the local paper that
reads “Wanted: retired army Captain for light household duties and fireside
companionship. Must tolerate mild eccentricity and strong scientific advice.
Knowledge of Giant Maggots, Super Intelligent Spiders and Prehistoric Monsters a positive boon.” Both the Doctor and Captain Yates are obviously a lot older than they were when last seen, and the story takes place in contemporary time – Baker even notes it’s the 21st century. That makes Yates a pensioner, and the Doctor, well, a time-traveler.

It takes a lot of fine writing and even better acting to
pull off such a concept, but that’s what Doctor Who does at its best and that’s what happens here. My wife and I listened to the CD while driving from Connecticut to JFK airport in New York City, which is generally interminable but, this time, entertaining.

It turns out Tom Baker can indeed go home again.