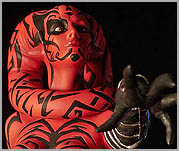 Once again I didn’t make it to the NYCC but I’ve been to umpty-bum comic book conventions over the years, both as a fan and a professional, and I’ve learned one or two things along the way. Being a pro (especially if you’re a guest at the con) and being a fan are two very different experiences. I always regard being a guest at a con as a working weekend and it can, in fact, be more tiring for me than going as a fan.

My first job is giving any fan that comes up to my table a good experience. These are people who buy my books and that fact keeps me employed. I may be tired, I may be stressed, there may be any number of things bothering me but none of that matters. The Con promoter has paid my way with the expectations that my name may help draw more paying customers and that the paying customers will enjoy themselves well enough at the Con to want to come again next year. I’m part of that equation. It’s part of my job as a professional.

I also want to create more fans. I greet people who pass by, try to engage them in conversation, try to interest them in what I do. If I have something to sell, I have a quick spiel to give passers-by an idea of what’s there. Folks at neighboring tables soon learn to tune me out because it can get repetitive. My Mary has noted that I have developed a “Con persona” – an aspect of myself that I trot out at Cons. I call upon my theater and acting background to “play” a version of myself. It’s an authentic version of me but it’s meant to give those I meet a good experience of me, no matter how I may be feeling. That’s important. They deserve it. It also creates positive word of mouth.

That’s not to say I’m above goofing around. At one Star Wars Convention, there were lots of people in costume, some playing characters I created. That’s always interesting – meeting real life versions of characters that had existed only in my head. I have to admit I pay closer attention to those cosplaying Darth Talon. For those who don’t know the character, suffice it to say that it’s sexy female in a brief costume and lots of body paint. One such young lady was posing in front of the Dark Horse booth and she sure could wear that body paint. I sidled up to her during a pause in the snapshots, smiled, and told her, “I’m your Daddy.”

She gave me a look and said, “Excuse me?” I then hastily explained that I was one of the two creators of the character she was cosplaying. Then she smiled and said, “Oh, you’re so cute!” Which, translated, means, “Look at you! Old enough to be my grandfather and you’re flirting with me! That’s so cute!”

On the other hand, I can’t complain too much. I met the two big loves of my life – Kimbery Yale and Mary Mitchell – at conventions. Kim was at a big combined Doctor Who/Comic Convention in Chicago during one sweltering summer. I was trying to get the rights to do a Doctor Who live action play and was talking with the show’s producer, John Nathan Turner, and Terry Nation, one of the legendary writers for the show and creator of the Daleks. This young woman accompanied Mr. Nation. She had a slight accent and I assumed she was his secretary or some such. Turns out she was working security for Mr. Nation, she was local, and her name was Kim Yale.

The other woman was, of course, My Mary – Mary Mitchell. I’ve told the story elsewhere of how we met; she came down to Chicago and the Con to show her portfolio and chose to show it to me. The reason she chose me was that she saw me playing with some young, shy kids at my table, trying to draw them out, and she thought if I was kind to them I might be kind to her. I wasn’t kind; I was enthusiastic. Before she knew it, this madman had her portfolio and was dragging her around to all sorts of people insisting she get work. The funny thing is that she didn’t really know who I was when she approached me; she just knew I was nice to children.

I was and I am. Those kids may be readers some day and they might become my readers. Also, the parents who are towing them around the Convention floor are appreciative if you’re nice to their kids. I even discouraged some children from reading some of my work, like GrimJack, if I feel they’re a little young for the material. I’d prefer to steer them towards good comics for their age group even if I had nothing to do with them. Parents appreciate that and some have even written me thank you letters. All part of that good Con experience.

I’ve also learned to be careful naming favorites or least faves of my work before fans. I once, on a panel, named my least fave book in a given series, going so far as to state that, if I could, I’d buy all the copies of it and destroy them. I thought I was being clever. One fan in the front row had a wounded expression and said, “But that was my favorite issue!” So I don’t do that anymore.

I also try to be open. At one Con I was having a quick lunch from the food at the venue. I was sitting at a table by myself when a fan approached me. She and some other fans were sitting at another table and recognized me and wondered if I would care to join them. While I don’t mind eating by myself, I said “yes” and we all had a very good time.

I do have fun at Conventions and it gives me a chance go see old friends – mostly pros – and make some new ones. For me, however, they are working weekends. Writing is solitary work but there is that social aspect, the selling of yourself and your work, and for me being a professional means making sure the fans are happy.