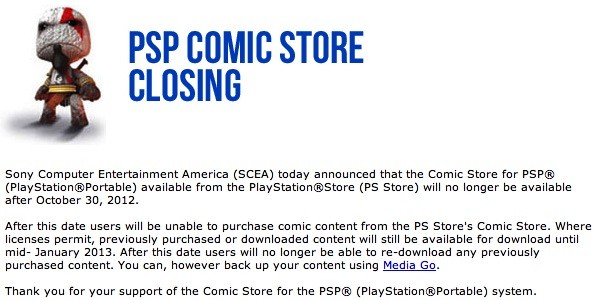 Sony is telling PSP owners that its comic book portal is shutting down after October 30th. Users will then be unable to download the necessary app or buy additional titles. Any currently owned comics will be available to download again until mid-January, but readers will be on their own to preserve existing comic collections after that. According to Engadget:

Outside of Japan, that creates significant problems for literary PlayStation fans: while PS Vita owners in Sony’s home country will get a Manga store and reader in October, there’s no equivalent crutch for other countries (or any PSP owners) at this stage. The console maker is non-committal and says there’s nothing it can discuss “at the moment,” which to us is a hint that we shouldn’t plan our reading hours around a PSP or PS Vita in the near future.