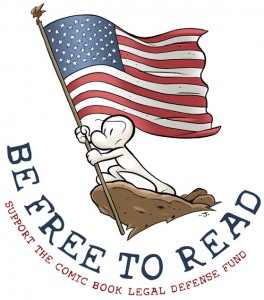 Banned Books Week, the national celebration of the Freedom to Read, starts this Sunday!  Comic Book Legal Defense Fund is a sponsor of Banned Books Week, and will be joined in the celebration by members of ComicsPRO, the comics retailer trade association who will be hosting displays and events to raise awareness of the comics that have been banned and challenged!

Southern Fried Comics     Banned Comics shirts & display.  For every $5 donation, customers will go in the draw to win a banned books gift pack (and we’ll get 10% off their purchases).

Dragon’s Lair Comics & Fantasy   Banned Comics Readout on Wednesday October 3rd starting at 6:00PM. Additionally,  a display of banned graphic novels up all week with case files for people to read and a membership drive!

Are you doing a Banned Books Week event?  Would you like to get in on the fun and host one?  Email us at info@cbldf.org and put Banned Books Week in the subject and we’ll add you to our list!  If you’re looking for ways to get involved, check out our How You Can Help page.  Want to spread the word?  Here’s some handy signage you can print out, and here’s a brochure you can print to spread the word!