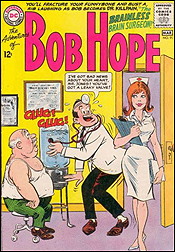 I started reading comics in the fifth grade. I still have the very first comic book I ever brought: The Avengers #43. I won’t bore you with the heartwarming story of how I pretty much learned to read with comics. I’ve told that story a billion times and I’m sure (although I can’t remember) I’ve written about it on ComicMix so just assume I clued you in, dry your eyes and say a silent “thank you for the heartwarming story Michael Davis shared with me” and move on.

Oh, if you find the article I’m pretty sure the issue number of the Avengers is wrong. When I looked at the issue I was surprised it was issue 43. All this time I was thinking it was later…

I was a serious comic book collector in grade school and by the time I got into high school I had over 100,000 comic books, including the complete silver age of Marvel and almost a complete silver age DC Comics collection. DC was (and is) my favorite universe but I couldn’t bring myself to go all out for copies of Bob Hope, Lois Lane and some of the other DC comics, which in my 10-year-old wisdom I considered kid stuf’.

I was a lucky so and so when it came to my comic book collection. Not once, not twice but three times I was the lucky benefactor of someone else’s collection. Three times when I was a kid someone in my life gave me his or her comic book collection. I got one collection from a cousin who had grown out of it. I got another from an 8th grade friend named Karl McKenzie. Karl was moving and his father refused to take those ghetto trash books to his new home.

It occurred to me later that Karl’s dad was moving from the hood to a nicer (white people lived on the block) place and no son of his was going to be reading that ghetto trash among white people who read Look and Life magazines.

The funny thing about that was I saw Karl about a year later and he told me one of his new friends on the block was a huge comic book fan as was the kid’s dad. Karl told me that his dad now thought that comics were cool.

Clearly this was an attempt on Karl’s part to get me to return his collection.

Nope. The chances of that happening was, lets see… zero.

I think the word back then was “Indian giver.” I may or may not have called Karl that; I don’t remember. I do remember regardless how I thought Karl was going about it, he was not getting back book one. If his grandmother was dying and the only thing that would have saved her was a couple of books from the collection it surely would have been bye, bye, Grandma.

The third comic book collection I inherited was from a then girlfriend’s mom whose husband collected comics but one day the mom decided she didn’t want them in the house anymore. Guess who volunteered to lift that heavy burden from her shoulders?

My comic book collection was so badass that a local newspaper ran a story on me when I was about 14.

I loved comics and collected like an addict up until my first year at Pratt Institute.

My first year at Pratt pretty much killed my desire to read comics.  I had attended the High School of Art & Design (A&D) before Pratt and when asked what I wanted to major in I had to choose between comics and illustration. My cousin, William T. Williams, had a long talk with me about my major would be at A&D. He said to me at the end of our talk the following; “If you choose comics as a major you will stave and die.”

My cousin was my mentor and the only real father figure I’ve ever had in my life so I listened to him. I kid him about the success of Milestone and all the other comic related things I’ve done but I’ve never ever regretted that decision to major in illustration and not comics.

FYI, my cousin is not just a relative who gave me good advice, he’s also one of the premier artists on this planet and one of his paintings cost more than my house and I have a nice house… in a white neighborhood!!

That is not a joke.

So with little fanfare I left my comic collection and my desire to become a comic book artist behind. I still collected a bit in high school but by the time I got to Pratt, I was completely comic book free.

End of part one!