PAUL BISHOP AND THE SWEET SCIENCE OF PULP 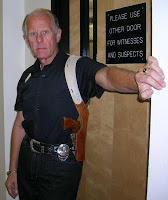 Pulp novels covered a wide range of genres. New Pulp Author Paul Bishop is working with a talented crop of writers to bring back the sweet science to pulp. Welcome to Fight Card.

All Pulp recently sat down with Bish to discuss his writing, the Fight Card Series, and all things pulp. Pulpsters, meet Paul Bishop.

PB: I’ve been voraciously reading pulp stories since my early twenties starting with reprints from the detective story magazines (such as Black Mask), and eventually moving on to the standard hero tales like the Shadow and Doc Savage.  When I started collecting pulps, I found myself drawn to the adventure, sports, and western pulps as they were more affordable and plentiful.

I got hooked first on collecting copies of Argosy and Adventure – magazines containing tale from the likes of H. Beresford Jones, Talbot Mundy, and the swashbuckling tales of George Challis (Max Brand).  A long run of Street and Smith’s Sport Story was next as I collected tales by Jackson Scholz under his many pseudonyms.  All of this led to Fight Stories Magazine and my fixation and enjoyment of fight fiction, which would eventually inspire the Fight Card series of novelettes I currently write and edit.

AP: How did you get your start as an author?

PB: I broke into writing professionally as a magazine freelancer.  I had some success, eventually making my way from writing for law enforcement related magazines (using my background as a detective with the Los Angeles Police Department as fodder) to top rank markets such as Runners World, Parents Magazine, and Psychology Today. I also worked steadily for several years on the full run of Mystery Magazine from its premiere as a slick, through its transformation to digest sized pulp, to its eventual untimely demise.

However, despite my success with non-fiction, what I really wanted to write was fiction and I was finally able to break in by selling a couple of stories to Mike Shayne Mystery Magazine and a brief revival of The Saint mystery magazine.  It would be another twenty years and a handful of novels later before I was able to crack the pages of Ellery Queen Mystery Magazine, but I eventually published there as well.

As for novels, I began writing paperback original westerns for Pinnacle Books’ Diamondback series (created by Raymond Obstfeld) under the rather appropriate house name Pike Bishop.  From there, I moved on to my first cop novel, Citadel Run (now retitled Hot Pursuit as an e-book).  Since then there have been ten more novels, a slew of short stories, two-dozen hours of scripted network television, and a feature film – all while staying busy with my LAPD career.

AP: How did the Fight Card series get its start and who is Jack Tunney? What was the appeal of writing boxing stories?

PB: The Fight Card series grew out of a phone conversation with fellow author Mel Odom.  I tracked Mel down after reading a pulp-style boxing story (Smoker) he had published as an e-book on Amazon.  We quickly found common ground in many areas, including a love of the fight pulps and especially the Sailor Steve Costigan boxing stories by Robert E. Howard.  With the advent of e-publishing, we realized we could create new fight stories which could reach and expand the niche audience who would love these stories as much as we did.  The concept of the Fight Card series then took on a life of its own.

After Mel and I wrote the first two books in the series, Fight Card: Felony Fists (me) and Fight Card: The Cutman (Mel), a number of hot young authors and a few established pros took notice and signed on with the Fight Card team.  We’ll have twelve titles published by the end of 2012 and every one of them is a hard hitting gem.

AP: There seem to be many different opinions about what can be defined as pulp. How do you define pulp and what do you look for in a pulp story as an artist and a reader? Do you consider the Fight Card series books pulp?

PB: The Fight Card novels are definitely in the pulp genre – straight forward, solid, stripped down, slightly larger than life storytelling.  It’s what made the original pulps so popular and accessible to a wide audience.  The New Pulp movement is definitely bringing the genre back in all its colorful, sensational, glory combining the sizzle of the cover art with story content aimed at more modern sensibilities, but with the values of pulp’s past.

AP: Where do you see the pulp and book industry in the future?

PB: E-publishing is here to stay.  Combined with the accessibility and ease of POD for physical books, authors themselves are now the driving force in the writing/publishing business.  It’s a great time to be a writer, but there are also whole new skill sets to capture from layout, to promotion, to editing. Yikes!  It’s worlds better than traditional publishing for all but the bestselling authors, but some days you wonder if you have to be careful what you wish for.

AP: Is there a particular character out there you haven’t had the chance to work on that you would love to take a crack at writing?

PB: I’ve had some fun writing for previously established characters, especially for the upcoming Nightbeat anthology (based on the radio show of the same name), but I actually prefer to work with my own characters.

AP: Where can readers find information on you and your work?

PB: 2013 will see Fight Card expanding its brand in several ways.  Aside for our traditional monthly offerings of Fight Card tales set in the ‘50s, we will be premiering three or four Fight Card MMA novels (set in the current world of mixed martial arts) and possibly two Fight Card Romance novels (yes, romances) designed to widen the audience for the series as a whole.

I’m also excited about a series of pulp anthologies I’m working on with pulp maven Tommy Hancock (Pro Se Press), which will be out early in the new year.  I’m also editing The C.O.B.R.A.S. Files, a collection of swinging ‘60s set spy stories (back when espionage was fun) from The Coalition Of Bloggers wRiting About Spies, which should be a lot of fun.

I’ll also be returning to my cop storytelling roots with a new series, The Interrogators, which will hopefully hit the virtual bookshelves next summer.

PB: 2013 looks to be a busy year for me promoting Fight Card series in numerous venues.  I will be at Pulp Ark in April, where I’ll be premiering my new Fight Card novel Swamp Walloper as well as one of the new Fight Card MMA titles.

AP: And finally, what does Paul Bishop do when he’s not writing?

PB: I teach an intensive, week-long, interrogation course once a month, which keeps me in touch with the law enforcement world.  I read as much as I can, work on promoting Fight Card and my other writing projects, and run four or five miles a day to keep my stress levels balanced.  After finishing 35 years of working full time with the LAPD, it seems I am busier than ever.

AP: Thanks, Paul. We look forward to reading your new books.

You can learn more about Paul Bishop here and the Fight Card series here.

Want to hear more from paul Bishop? Paul will be a guest on episode 130 of the Earth Station One podcast, going live September 27th at www.esopodcast.com.