Mindy Newell: The Sexual Preferences Of Wonder Woman, or… Whatever Floats Your Boat 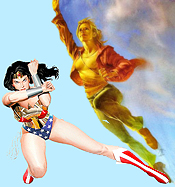 Last week’s column engendered a conversation with Bill Hannigan. Now Bill and I don’t exactly see eye-to-eye politically, and my belief that “Wonder Woman, considering her upbringing, would most likely look to her own sex for an adult relationship before venturing into anything heterosexual” seemed to create a Rubicon that neither of us would or could cross. Bill responded to my statement as follows:

“…while it’s not unreasonable that WW would explore a same sex relationship, I’d hope any writer would save that for another character – it plays straight (ha!) into the hands of those who would like to have us believe that being raised by gay parents (or even gay-tolerant parents) will make kids gay. If, as I think, it is far more nature than nurture, it should not matter if she were raised on Paradise Island, Fire Island, Monster Island or Long island.”

My first reaction: annoyance that Bill had missed the most important part of the paragraph, which ended “meaning she needs to discover just where her sexuality lies.”

… and I wanted to zoom off an angry missive in return.

But having spent mucho bucks for therapy over the years (which, for the most part, has helped me to successfully understand myself a little better – though some people I know may disagree with that, and you know who you are), I held off the angry missive and gave both of us a break on the tête-à-tête back-and-forth. In other words, cooler heads prevailed:

“Regarding Wonder Woman – I’m not saying that she must be gay. I’m saying that I believe her first inclination, given her upbringing, would be to seek love with her own sex. And, in fact, I think it would be interesting for Diana to discover that she is drawn to men – and then feel like there’s something wrong with her. This would parallel what so many young people who know they are gay go through in this society. although I do think its getting better out there.”

Bill’s answer was right on the mark, IMnot-so-HO:

“And I think you would be attacked without mercy if you tried to do a story like what you describe – the homophobes would, of course, lose their shit over you making WW gay in the first place and you would catch holy hot hell when you had her become attracted to a man. There is no doubt in my mind. You can hear the complaints now. “Newell chickened out!” “Oh right, that’s what every lesbian secretly wants, the right man to show here the true path!” “I finally found a character that I could identify with and now you’ve wee-ooh, wee-ooh!” It would be brutal.

“The worst part about creating groundbreaking characters, it seems to me, is that you lose control of them. Joss Whedon makes Willow gay and from that point on every time something bad happens to her (and [since] it’s a Joss Whedon show, bad stuff happens to you!) people start bitching and bitching; “Oh right, another gay relationship that ends badly.” As though anyone on Buffy was likely to have a happy ending, relationship-wise.”

Oh, yeah, Bill, I remember the uproar that the problems between Willow and Tara created in the homosexual community. And when Warren killed Tara, I was among the thousands screaming at the television set, “oh, no, you didn’t, Joss Whedon!” It didn’t matter that I’m straight. Their relationship was the most honest representation of a healthy, interactive, grown-up relationship between lovers, homosexual or heterosexual, I’d ever seen – and still not matched – on a television series, or for that matter, in a movie. Brokeback Mountain, despite all the hoo-hah about Jake Gyllenhaal and Heath Ledger getting it on, was not about a good relationship. Willow and Tara did not say, “I wish I knew how to quit you.” Willow and Tara were just two people who loved each other. Period. No “a very special episode announcement” bullshit, no “look how daring we’re being!” crap, no big deal – well, except for Oz.

Although I seem to remember Whedon saying he was “surprised” at the amount of angry letters and hate mail he received, I also believe he didn’t give a shit. Because, as I replied to Bill:

“[as for] the bullshit Whedon got for killing Tara…was a necessary dramatic action for where Whedon was going [i.e., the “Dark Willow” storyline.]

“[and] like Whedon, I don’t give a shit.  If it serves the character(s) and his/her/their story, I write it.”

So, yeah, I think that Diana of Themiscrya would be very confused about her sexuality. And I would write her that way. But, like I told Bill:

“Not that DC would ever let me do something like that.”

TUESDAY MORNING: Emily S. Whitten and Where Must Be Dragons?