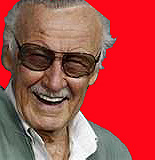 Way back in the early 1970s, Stan (The Man) Lee wrote… a whole lotta stuff. And among this stuff was a 167-line poem called God Woke.

Now, 40 years later, Stan is going into the studio to record his epic. There’s even better news: the profits will go to The Hero Initiative, a worthy cause if there ever was one.

Stan hasn’t recorded it as of yet, but we’ll keep you informed and advised. God Woke will be available on iTunes, and The Hero Initiative will get 35 cents from each sale.

Which, by the way, is about double cost of a Marvel Comic book around the time Stan wrote the poem.

Thanks and a tip of the brainpan to Denny O’Neil and Jim McLauchlin for the head’s up.