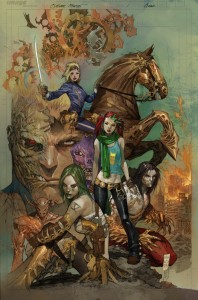 Kickstarter is a topic that tends to get people worked up, both on the pro and con sides.  Call it what you want, Top Cow just pulled in six figures to relaunch Cyber Force in what’s the biggest crowdfunding effort to date from a U.S. comics publisher (and #6 largest comics project to close on Kickstarter).

I occasionally compare crowdfunding to the days when artists had patrons who paid the bills and let the artists create.  That metaphor seems particularly apt here.  1,419 people pooled their resources to raise $117,135 which will fund 5 issues of Cyber Force with free distribution online and in print.  That averages out to roughly $82.50/person.  A very high average.

Kickstarter tells you the most popular pledge is in the $20-$25 range.  The most popular Cyber Force pledge level was the $50 level, which was also the hard cover graphic novel level.  622 people pledged there/ordered the hard cover and when you add in the higher premiums, it looks like somewhere in 800-850 range for various HC copies.  So while this wasn’t _solely_ funded on the strength of the collected edition, around half of it probably was.

The gamble here is that by making the material freely available, Cyber Force will garner a big audience for issue #6, which would theoretically be a paid purchase.  Or perhaps they can do another Kickstarter for the next arc.  Either way, Top Cow rolled the dice on this one and came out of it getting what they wanted and a little bit more.

There’s a lot left to play out with this new variation on Kickstarting a comics project.  The material has to be produced.  Reactions gauged.  The plans for issue 6 and beyond formalized and executed.  The journey has just begun, but this is going to be fascinating to watch.  New rules apply and we’re not sure what those rules are yet.