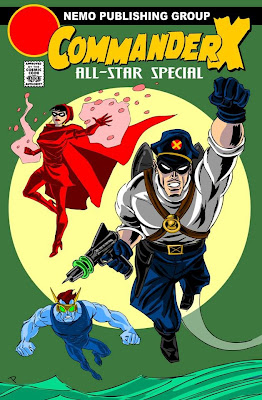 Commander X goes solo in an all new “Commander X Adventures All-Star Special” comic book
Up next: Commander X will take to the skies in a cross-over comic with Captain Midnight

PORTLAND, MAINE (July 31, 2012) Return to the Golden Age of high adventure with Commander X in three tales featuring giant monsters, robots, mystery and action. The stories in this 40 page, full color comic book are told in the spirit of the great adventure yarns of the 1930s and 1940s and take place from Tibet, to the Sargasso Sea, to the Sea of Japan. Written and illustrated by Jay Piscopo, this “Commander X All-Star Special” recaptures the excitement and energy of the Golden Age of comics when superheroes were born; featuring fast paced stories, science fiction gadgets, bright colors and breakneck action.

“In the sea, in the air, and on the land Commander X delivers the kind of ‘all in color for a dime’ entertainment that’s missing in comics,” noted award-winning comic book writer and editor Brian Augustyn.

“This comic book is an homage that recaptures the magic of the pulps and Golden Age of comics with a modern twist,” said Piscopo. “Our hero, Commander X, is a classic comic strip and movie serial hero with some high tech gizmos and time travel thrown in.”

“Fans first met Commander X in “Capt’n Eli,” then they got to experience him as a limited edition Mego-style action figure, and now they get to see him in his own one-shot comic book,” continued Piscopo. “Next, fans will get to see him team up with the legendary Captain Midnight.”

This December, Nemo Publishing and Moonstone Books will publish a cross-over one shot comic book featuring Commander X with the renowned Captain Midnight. This 28 page, full-color book will be written by longtime DC Comics writer and editor Brian Augustyn. Artwork and co-plotting will be by Piscopo. View image gallery at this link.

Commander X in part of Piscopo’s Nemoverse of characters and is an integral part of his “Undersea Adventures of Capt’n Eli” graphic novel series. The tales in “Commander X All-Star Special” provide clues to some of the mysteries about Commander X uncovered in the first two volumes of “Capt’n Eli” and give hints to what’s to come in Volume 3, which will be released this winter

In the story “The Guardian of Tantarus,” the Red Octopus and the Axis powers want super weapons from Atlantis. Can Commander X stop them?

In “Allies,” fans meet Commander X as the Undersea Knight. This version of Commander X is also available as a limited edition Mego-style action figure (http://captneli.shipyardshopping.com/index.html).

“With this collectible figure, we’ve captured the nostalgic feeling of a special toy that could take you into another universe,” continued Piscopo. “Seeing Commander X in his Undersea Knight uniform really sparks the imagination.”

In “Wake of the War Beast,” Commander X and his scarlet-clad ally, the mysterious Circe, Sorceress of the Sea, team up to subdue an ancient sea monster in the Sea of Japan.

More about Jay Piscopo and Nemo Publishing: Piscopo is the author and illustrator of Nemo Publishing’s “The Undersea Adventures of Capt’n Eli” graphic novel series and “The Sea Ghost #1: The Sea Ghost in the Machine” comic book. He was also the artist for Moonstone’s new “The Spider” and “The Phantom Detective” comics.

Commander X is part of the Nemoverse of characters tied to the Capt’n Eli’s line of hand-crafted sodas from Portland Maine. Capt’n Eli is the namesake of real-life World War II veteran Eli Forsley who was also the inspiration for Capt’n Eli’s soda. Read the story behind the story at this link.