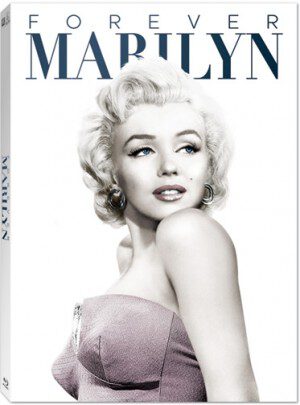 Given her enduring appeal fifty years after her death, it can easily be argued that Marilyn Monroe was the signature pop culture icon of the 20th Century and her allure is lasting well into the next century. Last year, I read Max Allan Collins’ take on Marilyn’s death before watching Michelle Williams portray her in My Week with Marilyn. Her career has become the spine for the NBC series Smash. Her image is found in commercials, artwork, music videos, calendars, and on and on. While her appeal and persona don’t grab me, I respect her impact on America and the world.

Out this week form 20th Century Home Entertainment, in time for the morbid memorial, is the seven-disc Blu-ray set Forever Marilyn. Included in the set are the recently released Blu-ray editions of Gentlemen Prefer Blondes (1953), How to Marry a Millionaire (1953), River of No Return (1954), There’s No Business Like Show Business (1954), The Seven Year Itch (1955) and the Blu-ray debut of Some Like It Hot (1959) and The Misfits (1961). The cardboard packaging does not properly serve a collection of this magnitude. Similarly, there’s a paucity of extras to codify just how special Marilyn Monroe was as a personality, performer, and woman.

It’s not a comprehensive collection of her films and afficianados are upset over the deletions but in the grand scheme of things, this collection is a pretty solid sampler of her greatest works. If you’re feeling selective, they are also now available as individual releases. The reason has as much to do with the material as it does with the performer. Monroe was well situated, placing herself in the hands of directors Billy Wilder and Howard Hawks along with some very smartly written roles. While she might have been a wreck in her personal life, her choice of parts was pretty spot on as witnessed in this septet of films.

Of the films included, the only special feature love was showered on The Seven Year Itch which includes Audio Commentary by Billy Wilder Biographer Kevin Lally, Isolated Score Track, Deleted Scenes, Still Galleries, Theatrical Trailers, “The Hays Code: Picture-in-Picture with Sexual Innuendo Meter”, Marilyn Monroe Interactive Timeline, “Monroe & Wilder: An Intersection of Genius”, Fox Movie Channel presents “Fox Legacy with Tom Rothman”, “Hollywood Backstories: The Seven Year Itch”, and “Fox Movietonews: The Seven Year Itch” Given that the film gives us the iconic shot of Marilyn and the upblown skirt and a statue of that image is entitled Forever Marilyn, this is all very fitting.

The transfers to Blu-ray are fairly excellent and uniform, looking and sounding very impressive. And it’s fun rewatching the classics because they hold up nicely. You can enjoy them as film fare, recognizing Marilyn added to their luster and was not the cause. Credit has to be given to the writer, director and costars, which includes some fine work by Ethel Merman, Jane Russell, and Betty Grable. and Lauren Bacall.

Most of these are slight fare compared with other works of the time, but they remain marvelously entertaining starting with Gentlemen where Marilyn and Jane sing and dance in search of husbands. A variation on that theme is in the non-singing Millionaire with Marilyn, Betty, and Lauren as models (back when models had some meat on them). Merman is the focal point of Show Business, of course, but the story of The Five Donahues is nicely told. You can’t go wrong with a supporting cast including Donald O’Connor, Mitzi Gaynor, and Dan Dailey.

More dramatic fare is River where Robert Mitchum is a widower taken advantage of by gambler Rory Calhoun. When Calhoun’s wife Marilyn nurses him back to health things grow complicated. Director Otto Preminger shot this at the Jasper and Banff National Parks a so the scenery rivals Marilyn for beauty.

The two Wilder films remain the strongest in the set starting with Itch, a story of temptation in the form of Monroe as the sexy next door neighbor. She helps herself to Tom Ewell’s air condition while his wife and son are away and it’s all he can do to honor his vows. While entertaining, it treads a fine line between comedy and betrayal but it merely was a warm up to Some Like it Hot, one of the funniest films of the century. Jack Lemmon and Tony Curtis were never sharper as men in drag, performing with Sweet Sue and Her Society Syncopators, an all-girl group, so as to avoid mobster George Raft. Monroe took all her screen personas and poured them into “Sugar” Kane Kowalczyk, a memorable character. A lovesick Joe E. Brown steals the film with the immortal last line.

The Misfits is remembered best as her final film, but it was also Clark Gable’s last screen appearance as he died within two weeks of wrapping production. Written by Arthur Miller, it’s a somber story to begin with and was given added weight for the bookend it provided her screen career. As their marriage was unraveling, Miller continued on rewrites which led to some autobiographical material seeping into the story which was conceived to put Monroe’s dramatic chops on display. Legendary John Huston oversaw a troubled shoot, drawing what he could from an ailing Gable and a drug addicted Monroe. Despite the credentials of director and writer and the talent of the cast, the finished film is uneven and never quite achieves its lofty goals.

Whether you’re eternally infatuated with Marilyn or not, there plenty of reasons in this collection as to why she captivated one generation after another. In Blu-ray, these dazzle and delight, offering you a good reason to sit down and enjoy these all over again.