FORTIER TAKES ON ‘THE COLD DISH’! 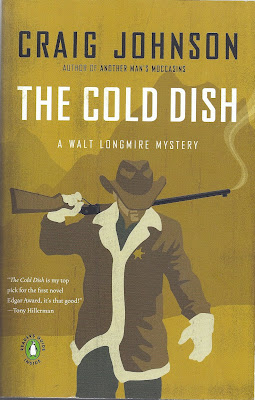 One of the benefits of writer Craig Johnson’s Walt Longmire mysteries being adapted into a critically well received television series is having the publisher re-issue new editions of the books; to include the very first, “The Cold Dish.”  For those of you who have never read any of these or have yet to catch the TV show, which airs on A & E on Sunday evenings, you are missing some truly excellent entertainment and might want to run down to your local bookstore and pick up a copy of “The Cold Dish” right now.
The protagonist is Walt Longmire who has been the sheriff of Wyoming’s rugged Absaroka County for twenty-four years. A widow with an adult daughter, Longmire’s solitary life resolves around his job and his tight knit circle of friends and co-workers that include his feisty Deputy Victoria ‘Vic’ Moretti and Native American tavern owner, Henry Standing Bear. Longmire’s dry wit and sarcasm fuel his personality and adds a great deal of humor to otherwise somber, intense plots obviously centered around gruesome crimes.
In this first novel, a mysterious assassin is stalking four young men who two years prior had sexual assaulted an innocent Cheyenne girl with fetal alcohol syndrome.  When the judge lets them off with a light sentence, it only serves to heighten the tension between the local white community and residents of the Northern Cheyenne Reservation.  No sooner are the men released from prison then one of them is found shot to death and Longmire finds himself saddled with a case wherein the majority of the county has a motive; revenge.
One of the distinguishing peculiarities of the case is that the victim was murdered with a classic Sharps Buffalo rifle capable, in the hands of a marksman, of hitting a target at long range distances.  This one piece of information shortens the sheriff’s lists of possible suspects to a small handful to include Henry Standing Bear.
Johnson’s writing is brilliant and he combines the classic traits of a standard police procedural with the homey affectations of a western adventure; the beautiful Wyoming setting becoming as important an element of his tale as his characters.  He is also unafraid to add elements of Indian mysticism which lend a truly unique humanity to the story not found in most mysteries.  “The Cold Dish” is a masterful book that is both enjoyable and captivating and once finished, had this reviewer all too eager to find the next book in the series.  Honestly, it is that good…and then some.
Share