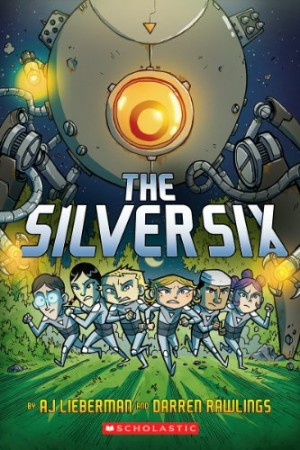 There’s a refreshing breathlessness to the action in The Silver Six, a brand new graphic novel being released on Tuesday. Set in a bleak future, humanity has apparently paved over the planet and has to survive in domed cities to breathe. Classes take field trips to the nearby corner where a tiny square of parkland, complete with a single tree, is an object of fascination. It’s a harsh and brutal form of survival given that the planet’s energy needs are seemingly handled solely by Craven Industries. They supply something called Hydro-2 and as long as they control this supply, they seemingly work above the law.

So does Phoebe Hemingway, a 12 year old whose parents died on a shuttle accident a year previously. She and her robot Max have been dodging revealing her true existence until social services finally catch up with her. Placed in an orphanage, Phoebe encounters five others and forms a fast friendship with them as if fate brought them together. As the story unfolds, that’s exactly the case as we learn each holds an identical document signed the day before their parents all died on the shuttle. Embedded in each document is a piece of a tiny electronic memory that needs to be pieced together so the kids can learn what really happened to their parents.

Meantime, old man Craven has dispatched Sam to retrieve Phoebe’s document, beginning a game of cat and mouse that drives most of the action. Once the running starts, they make it from the orphanage to a spacecraft to a moon and back again. Along the way, there’s some entertaining banter, some heroic acts, and an awfully lot of rushing around. Lieberman, best remembered for a run on Batman comics a decade or so back, keeps things moving so quickly that his target readers, 8-12 year olds, will turn the pages never stopping to question how 12 year olds know how to pilot spaceships and build robots.

Teachers will love this for its themes of friendship and family, heroic sacrifice and so on. There’s a large dollop of technical know-how tossed in yet we never see the kids actually taught any of this. Instead, the orphanage facility’s teacher is unintentionally misinforming the kids thanks to a Craven-supplied text.

Lieberman doesn’t do enough to make the six characters distinct and Darren Rawlings’ art style makes them appear 8 years old, not 12. Still his drawing is clear and imaginative with good color, which makes sense given his experience at Big Studios.

As an introduction to young adult science fiction or comics, this works just fine. It’s not the most original story and the plotting gets muddled halfway through, but the readers won’t notice, captivated by relatable, plucky characters.