Dennis O’Neil: Of Trilogies and Kindles 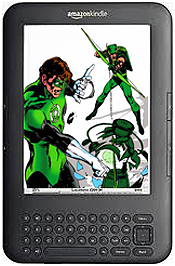 Based on…oh, I don’t know – some observation? A hunch? An angel whispering in my ear? Anyway, based on some darn thing, I hereby guess that some comics writers aren’t as aware of story structure as they might be – not as much as, say, their artistic first cousins, screen writers who, I’m told, are generally very aware of it, particularly if they’ve studied the craft in some college-level course, or read a few of the many books on the subject.

Well, although I do address the structure stuff in the courses I teach, I won’t burden you with it here and now. Not the time, not the place. However, maybe just a teensy bit of structure blather might not be amiss.

Have you noticed that trilogies seem to be the publishing rage? (Okay, not rage. Whimper?) There was the Girl in the Dragon Tattoo, which was twice a trilogy, as novels and as movies, and may be moving into a third trilogyhood because there’s been an English language film adaptation of the first novel – the other movies were in (I think) Swedish and were directed by (I’m sure) a Dane. (A great dane? Time will tell.)

Did I write “a third trilogyhood?” Yes I did. Wanna make something of it, buddy?

The other trilogy which is crowning the New York Times bestseller lists is Fifty Shades of Grey and its two sequels. I haven’t read more than a handful of the books’ words, but, ahem, somebody in this house has it on her Kindle and we have it on good authority that these novels are smut! (What’s on my Kindle is Walter Issacson’s bio of Steve Jobs, which is not in any way smutty, at least so far. Probably just as well.) I ask you: does such a thing belong on the Kindle of someone who attended Catholic schools, clear through to a university degree?

And while we’re on the subject of Kindles: the ninja fairies who work for Amazon snuck into my Kindle the other day and left a message informing me that the voodoo-hoodoo that runs the cyberworld has been upgraded, or at least fiddled with, and pretty soon I’ll be able to read comic books on the gadget. In two formats, if my understanding is good. Am I rejoicing? Moaning with happiness? Doing a celebratory dance? Nope. Still don’t trust technology, despite the fact that I’m really digging the Steve Jobs book. But I’ll probably give Kindlecomix a try when the ninja fairies make the machine hospitable to them, if only to demonstrate that, while you may not be able to teach an old dog new tricks, some old dogs are at least willing to try jumping through the friggin’ hoop.

But weren’t we discussing story structure? Well, consider yourself taught by bad example because this column is ill-structured, at least for story purposes – indeed, it’s structured only by association of topics. Not the best approach to dramatic storytelling. But maybe one of you can make it work.

RECOMMENDED READING: Save the Cat, by Blake Snyder. If you want to learn something about story structure, give this a try.