THE SKINVESTIGATOR RETURNS IN SUNBURN! 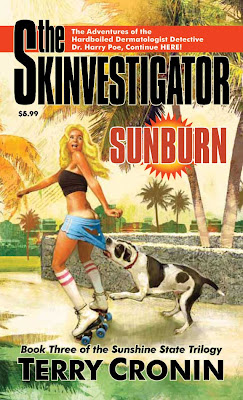 The third and final volume of the popular Skinvestigator series is coming out this Summer. Author Terry Cronin has published each novel on a yearly basis in preparation for pre-release at the famous San Diego Comic-Con. 3 Boys Productions will release the eagerly awaited final installment The Skinvestigator: Sunburn on July 31st, 2012.

As the finale to Cronin’s Sunshine State Trilogy, The Skinvestigator: Sunburn is not content to merely match the adrenaline-charged pace of his first two novels The Skinvestigator: Tramp Stamp and The Skinvestigator: Rash Guard. Instead, it explodes with a roaring storyline that blows the doors off the series and proclaims that the very best has been saved for last. Dermatologist Harry Poe is in trouble. He’s been abducted by Venezuelan thugs from his past and is poorly prepared for their increasing level of violence. Sexy tattoos, illicit cosmetic surgery, and espionage round out the exhilarating conclusion to the Sunshine State Trilogy and may just mark the end of the career of The Skinvestigator . The dermatologist detective series is currently available at Barnes and Noble and on Amazon.com

Terry Cronin created the critically-acclaimed horror adventure series Students of the Unusual and has been a long-term advocate for independent filmmaking co-founding the Melbourne Independent Filmmakers Festival. Fans can follow him on Facebook and Twitter. Readers can also visit his Skinvestigator fan page on Facebook.