The Bootleg War is now Available 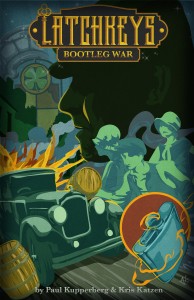 Latchkeys #4, “The Bootleg War”, is now available for Kindle and Nook. Author Paul Kupperberg talks about the writing experience.

For writers, ideas are like stacked up airplanes circling the fogged in airport. We want desperately to have all of them land safely, but some are going to have to stay up in the air a little longer than others until the weather clears or a runway opens up. As a result, we’ve all got lots of ideas circling our brains but no opportunity to bring them in for a landing on paper as quickly as we would like.

A few years back, Steven Savile, on a writers email list to which we both belong, suggested that a bunch of us join forces to take some of those high-flying ideas, throw them into a hat, and pick a few on which a dozen or so of us could work together. The idea was to hasten the development and writing of these various concepts by sharing the workloads. The result of Steve’s suggestion was a collective we came to call the HivemMnd.

While Steve has already related the secret origin of the HiveMind in an earlier post here on the Crazy 8 Press blog, the work of actually writing Latchkeys takes place not as a community activity, but in the individual workrooms, offices, and minds of our fourteen writers. The current episode, “Chapter 4: Speakeasy, Part One: The Bootleg War” began with a story by Kris Katzen, which landed on my desk for fleshing out and was a particularly fun story for me to work on. It incorporates elements that play to several of my strengths as a writer: It takes place in New York, the city in which I was born and about which I have an insatiable curiosity (I have shelves containing nothing but histories and biographies related to this, the greatest city on earth), and is set against a historic backdrop, in this case the Prohibition era of the 1920s (coincidentally, I recently read Daniel Okrent’s fascinating history, Last Call: The Rise and Fall of Prohibition).

I love to pepper period stories like “Bootleg War” with interesting little historic tidbits, whether about its locale or some incidental information (did you know Converse All-Stars sneakers were introduced during the First World War?)…just enough to give it the right flavor and a dash of verisimilitude. Of course, stories have to come from out of the characters first, but those characters need to be rooted in a world that’s as real as they are. The use of the wrong slang or an anachronistic prop and the reader is yanked out of the moment and all the mood and drama the author was hoping to set up is ruined.

And speaking of characters: Latchkeys stars a roster of good ones. I was already familiar with two of them, twin sisters Mercy and Marguerite, from writing one of the later Latchkeys episodes (#13, “Emmett”), but “Bootleg War” gave me the opportunity to get to know a couple of the other fascinating teens who populate this world. I hope you’ll find their intelligence and resourcefulness as interesting as I did while writing them.

So, to torture my opening airplane analogy just a little further, bringing Latchkeys in for a landing has been, in some ways, a long and sometimes bumpy ride, but now that we’re safely home, I wouldn’t have wanted to miss a moment of the trip. For readers, on the other hand, there’s nothing but clear skies and some good reading ahead.