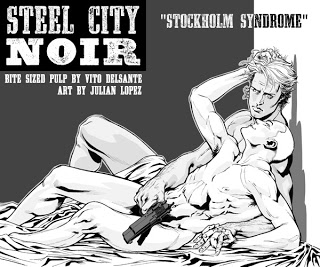 David recognized him right away. Tall, broad shoulders on a back that seemed to be built like a billboard. Wisps of blonde hair peeked out from under the ski cap, but his blue, steely eyes absolutely penetrated the wool covering. Manicured fingernails on a hand that held a pistol straight and narrow. Muscles that bulged in all the right places. He knew who his captor was, and despite the fact that he was holding a gun to his face, he had to say his name. “Carl?” he asked and cocked his head. The gunman trained his gun on the bank teller.