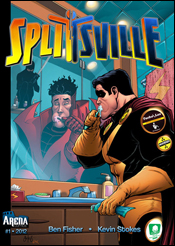 I won’t deny that I’m a sucker for fun, clever writing and shiny art. Who isn’t?. So when my artist friend Kevin Stokes gave me a sneak peek at one of his newest projects, Splitsville, which debuts at HeroesCon (June 22 through 24 in Charlotte, NC) and fits that description, I immediately requested a review copy. Arena Comics, a new indie comics publisher that boasts a slick European packaging style, kindly complied, and now I get to share my thoughts on Splitsville with all of you!

Splitsville Synopsis: Stalwart is the world’s only superhero and his arch-nemesis, Master Mayhem, the only super-villain.  What neither knows, however, is that they are the same man – two halves of a split personality.  But their devious sidekicks know the truth and have made millions exploiting the situation. The system appears flawless … until a brash new super heroine arrives on the scene and challenges the arrogant Stalwart to a not-so-friendly wager regarding Master Mayhem’s defeat.  With the sidekicks’ elaborate con on the brink of total collapse, will anyone survive?

There’s a lot to love about this comic right from the first issue. The concept is fresh – the hero and the villain are the same dude, after all! The casual allusions to the superhero/villain’s situation throughout the story are clever and subtle. And the first monkeywrench into the introduced status quo is a quirky one – i.e. the new superheroine in town, Blastcap, and her attempts to first work with and then one-up the “hero” of the book. There are also plenty of ongoing and potential plot threads being introduced, without any of it being too confusing. I’m not a huge fan of the “decompression” style of storytelling that’s pretty common these days (overall, though it can be used well for effect here and there) and like plenty of excitement and interesting plot twists to keep my attention. Splitsville delivers in that area so far.

Along with the question of what’s going to happen when Stalwart and Blastcap compete, there’s also a question (in my mind, at least) about Blastcap’s motivations, and her backstory – are her motives really what they seem? I feel like there might be more to her than meets the eye, and am intrigued. I also wonder about the two sidekicks, and how they’re going to deal with this new wrinkle in their money-making and hero/villain-exploiting plans.  And what’s with the ninja who keeps showing up everywhere Stalwart goes?… Also, do I detect a hint of unwilling attraction to our new superheroine by our remarkably selfish hero?

Speaking of Stalwart, I love that the biggest superhero in town is kind of a jerk (and even his sidekick knows it) – because I mean, hey, wouldn’t you maybe be too, if you were the only superhero around? It makes sense. Sure, he stops short of charging people to save them, but with the product sponsors and Stalwart’s obvious love of the spotlight, (not to mention his ridiculously outdated but still sexist book of insults) it’s clear we aren’t dealing with your average Superman. Master Mayhem, on the other hand, is eco-friendly and apparently an animal lover – not exactly what you’d expect of your main villain. And naturally he’s the one working the Clark Kent glasses. Fisher’s clearly playing with the established superhero genre, and I get a big kick out of stuff like that. Comics that make me smile (or even laugh) are always appreciated.

Speaking of things I appreciate, quality art that enhances the story is definitely amongst them, and this comic certainly has that.  The pencils, inks and colors are gorgeous, and shiny without being cartoony.  The style perfectly complements the energetic and slightly zany characters and storyline. Penciler Stokes has a great talent for expressive faces, but also a strong flare for action scenes. I love the cavalcade of cheesy grins, grumpy looks, devious expressions, exasperated facepalms, and more that we get throughout the comic (who needs decompression when you can say so much with a single look?). And yet scenes like Stalwart chasing one of Mayhem’s destructive robots through a wall are just as much fun. The little world building details (like an ad for “Hatorade,” sponsored by Stalwart, on a wall near where Stalwart and Blastcap are facing down evil creatures) are also priceless.

Splitsville’s characters are unique, and though I wouldn’t necessarily want to hang out with all of them, I’m loving reading about them; the art is consistently fantastic; and the story certainly has my attention. I also love the character sketches, bits of script, and other extras included in the issue. The preview for the next issue seems to hint at a possible team-up after all between our two ostensible “good guys,” and I’m curious to see how that plays out, along with the competition they already have going. This issue is an excellent start to what looks like a great miniseries, and I’m looking forward to seeing the rest. Give Splitsville a try, and I bet you will be, too.

So that’s the news from me this week. Next week, we have a very special guest: Deadpool, that’s right, Deadpool, is stopping by to answer your questions. So if you’ve got a question about anything (really, anything) for the Merc with a Mouth, leave a message in the comments here, and he’ll get back to you in his own…very special way…next Tuesday.

Until then, Servo Lectio!