FORTIER TAKES ON ‘THE LONE RANGER-VENDETTA!’ 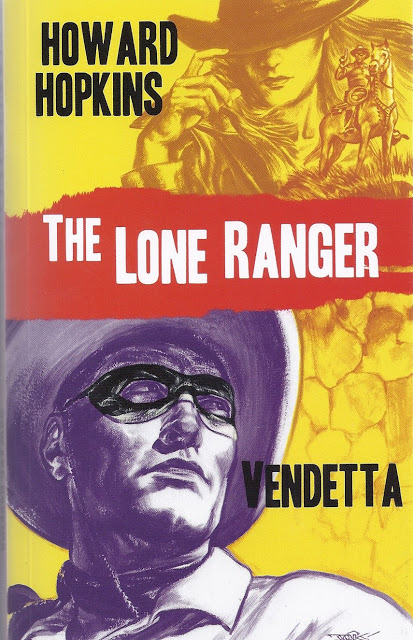 It is somehow appropriate that the very first title in Moonstone Book’s new line of small paperback novellas would be the late Howard Hopkins, “The Lone Ranger – Vendetta.” Howard, who passed away unexpectedly last winter at the age of 49, though a versatile writer in all genres, was primarily known for his western novels under the penname of Lance Howard. Thus when Moonstone acquired the rights to produce new prose adventures of the famous Masked Man and his Indian companion Tonto, it would be to Hopkins they would turn first.
“The Lone Ranger – Vendetta,” is Howard at his finest, at ease narrating a fictional adventure of the old west that is still deeply rooted in the authentic aspects of that setting. Hopkins knew western lore, culture and lingo.  His delving into the Native American spiritualism that motivates the Ranger’s companion is brilliant and adds as yet another layer to a character many of us have known most of our lives. Hopkins also has no difficulty accepting this hero’s old fashion moral code about never taking a life, of always wanting to serve justice and never capitulating to his own personal desires for vengeance which is the theme of this short novella.
From out of the Ranger’s tortured past comes as yet another monster in human form seeking to wreak pain and suffering on our hero and all those he holds dear.  This time the villain is none other than the widow of Butch Cavendish, the outlaw who ambushed the six Texas Rangers in Brian’s Gap and in the process created one of the most iconic legends ever to come out of the old west.  Unbeknown to the Ranger and Tonto, Cavendish had been married and now this female murderer launches an insidious plan to find, capture and kill the Lone Ranger. But before she does so, she and her gang of cutthroats invade the town of Coopersville and proceed to butcher its citizenry.
All too quickly the Lone Ranger discovers for himself that female species is often deadlier than the male. But to stop her will he have to sacrifice his life and at long last fill the empty grave that await him in Brian’s Gap? “The Lone Ranger – Vendetta,” is a fast paced, thought provoking action western that looks beneath the man named John Reid and his history, revealing a heart big as the west and just as noble.  That it would mark the final chapter in a gifted writer’s stellar career is truly fitting, as Howard Hopkins the man was as large a talent as the hero he loved so much.
This is a book to own and treasure for all western fans; young and old.  Thanks Howard, and until we meet again, happy trails.
Share