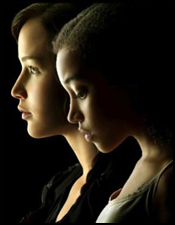 This column is going to get to its point in a roundabout way. If you want to get right to the incendiary arguing, skip ahead a few paragraphs. However, once you get there, you may find spoilers for The Hunger Games. Be prepared.

For the rest of you, I have a story to tell. When I was a girl of 10, I had a dog, Nancy. Before she died 11 years later, she and I had many heart-to-heart talks, where I would talk and then imagine what she would say to me.

We had a lot in common, in that we were both female and living in the Midwest. However, at some point, I realized that I was assuming we were even more alike. I thought she loved the Smothers Brothers and the Incredible String Band as much as I did. I thought she was against the war in Viet Nam. I thought she spoke English.

And I thought she was white.

I mean, she was white, except for her head, which was red and brown. Still, this was fur, not skin. It took me a while to recognize my assumptions as racist.

Some of this is how the human brain works. When someone says the word mother, I imagine my own mother. If I read a book with a first-person narrator, I assume the narrator is a middle aged New York woman like myself until the author establishes other characteristics.

The character of Rue is one who inspires more detail. She is small and slight, like Katniss’ sister. She is shy, but smart and good at hiding. Her hair and eyes are dark.

So is her skin.

When I read the book, one of the fun things for me was to try to figure out which territories of Panem corresponded to which parts of the United States. Katniss lived in an area full of coal mines, so I figured she lived in Appalachia. Rue lives in a place that is warm and humid, a place where everyone works in agriculture. I imagined Florida, and maybe her ancestry was African-American with maybe some Cuban.

Apparently, some readers did not pay that much attention. After the movie opened last weekend to record-setting crowds, the Twitterverse was inundated with postings by people who were upset by the casting of a dark-skinned actress to play the part of Rue. There were so many complaints that there is a Tumblr site dedicated to recording all of the posts (which I found via this, so thanks!).

Now, I am not always a fan for color-blind casting. I didn’t like it when they talked about Marlon Wayans for Robin in the Tim Burton Batman movies, although I would like to believe that’s because I didn’t think he was right for the part. I thought making Jimmy Olson black, which was under discussion for a time, was kind of arbitrary and therefore a bit condescending. Both one these opinions may represent a layer of racism I haven’t yet exorcised.

But when an author takes the time and effort to specify a character’s ethnicity, I believe her.

I don’t know who these Twitter posters are, or what kind of lives they lead. I don’t know their opinions on other subjected. I haven’t even seen the movie yet.  In any case, Rue is lucky that she doesn’t live in their neighborhoods. Or walk around in a hoodie with Skittles.