Press Release – For Immediate Release
HAWK: Hand of the Machine– now in paperback and on Kindle! 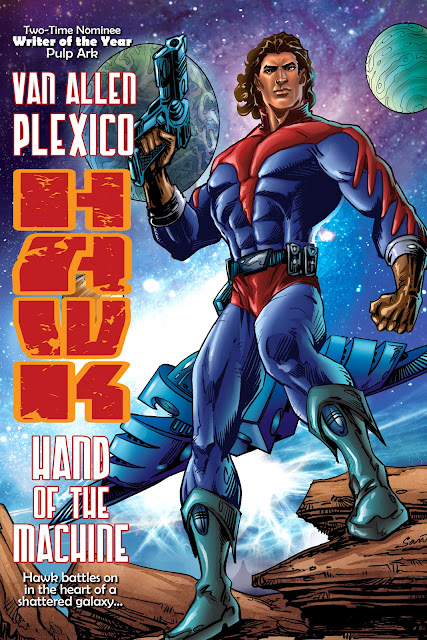 (May 29, 2012)  White Rocket Books proudly announces the release both in trade paperback and Kindle formats of HAWK: HAND OF THE MACHINE, a far-future science fiction adventure novel by award-winning author Van Allen Plexico (The Sentinels; Assembled!), set after the invasion and devastation of our galaxy.
Conjuring images of the great adventure-fiction lawmen of literature, from the Lone Ranger to Green Lantern, HAWK: HAND OF THE MACHINE introduces us to Hawk, an officer in service of the great Machine intellect that protects the survivors of our galaxy.  Awakening naked and screaming in a post-apocalyptic future, he discovers our already-shattered worlds being overrun anew by savage alien invaders—and the Machine strangely silent.  Plunging into action, he finds himself armed with only a few high-tech weapons and a sentient spacecraft with its own hidden agenda.  Now he must discover the truth about the attackers, about himself—and about the other Hands of the Machine.  Do any still live? If so, will they help him or hinder him?  And, most critically of all:  Is Hawk himself really who he seems, or is he something far worse: the greatest traitor and criminal in all of history?
“HAWK—the character and his setting—came to my mind in almost complete form a few years ago,” says Plexico.  “But with the success of my Sentinels novels, he sort of got pushed to the back burner for a while.  Now White Rocket Books is rectifying that situation.  Hawk is, I’m confident in asserting, far too good of a character to ignore for long.  His story should grab anyone who enjoys the idea of the lone lawman patrolling the lawless expanses of Earth and the depths of space—from the Lone Ranger to Babylon 5’s Rangers to Raylan Givens of Justified—and dealing with all sorts of unsavory menaces.  And then, as the action escalates to truly epic levels, with futuristic armies clashing across alien landscapes, there are the twists,” Plexico adds.  “A whole battle cruiser full of them, before Hawk is done!”
Plexico has been called “truly gifted” (Pulp Fiction Reviews) and “amazingly talented” (Sean Taylor, author of Show Me a Hero).  “Nobody—not even Abnett and Lanning—is doing cosmic superheroes as well as Van Plexico is doing them, period,” adds Barry Reese, award-winning author of Rabbit Heart and creator of the Rook.
Portions of HAWK appeared serialized in the February and March 2012 issues of Pro Se Presents, to general and widespread acclaim.  “One of the leading New Pulp writers of today, and able to bridge nearly any genre,” said publisher Tommy Hancock, “Van brings a special touch to anything he writes and creates.”
White Rocket Books is a leader in the New Pulp movement, publishing exciting action and adventure novels and anthologies since 2005, in both traditional and electronic formats.  White Rocket books have hit the Amazon.com Top 15-by-Genre, have been nominated for many New Pulp awards, and have garnered praise from everyone from Marvel Comics Editor Tom Brevoort to Kirkus Reviews.
On sale as of May 29, 2012, HAWK: HAND OF THE MACHINE is a $15.95, 6×9 format trade paperback from White Rocket Books, as well as a $2.99 e-book for Amazon Kindle. (Nook format is coming soon.)
356 pages
ISBN-10: 0615641318
ISBN-13: 978-0-615-64131-7
On Amazon.com:
Trade Paperback : http://www.amazon.com/Hawk-Machine-Van-Allen-Plexico/dp/0615641318
Kindle edition:  http://www.amazon.com/Hawk-Machine-Shattered-Galaxy-book/dp/B00852PZ1O
Share