John Ostrander: The Last Word On That Movie 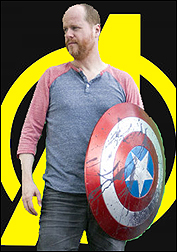 So I finally joined the clamoring hordes who have gone to see The Avengers and, yes, I had a really good time. No spoilers but I can define my favorite scene in two words that won’t spoil the show: “Puny god.” ‘Nuff said. Those who have seen it know what I’m talking about. I also really enjoyed the little scene at the end of all the credits.

It’s made a billion dollars worldwide, and its already on its way towards making a bazillion, I’m sure. Marvel has played it very canny, building up to it by way of Iron Man (I and II), Thor and Captain America. You’d almost think that The Avengers success was inevitable and you’d be terribly, terribly wrong.

I got two words for you.

Joss Whedon is the real star of the film, having both written and directed it (having worked up the story along with Zak Penn who, among other things, wrote a bunch of Marvel X-Men movies, created the TV show Alphas and directed and co-wrote – with Werner Herzog – the wonderfully strange and funny film Incident at Loch Ness and, yes, that’s a recommendation). It must be really nice to be Joss Whedon right now. The Avengers is making money hand over fist and breaking all sorts of records. That translates into power out in Hollyweird – the power to get the movies you want to do green-lighted.

Yet, I’m also sure there will be those (especially those on the studio end who will have to negotiate with Mr. Whedon’s agents on his next salary) who will claim that it was all set-up by the other films and that anybody could have directed The Avengers and it would have done just as well. That sort of mind just sees us puny artistic types as widgets – take one out, plug in another. Same result, right?

To minds that think like that, I have two more words for you (and not necessarily the ones you’re thinking):

Bay, in case you don’t remember, has directed all three Transformers movies, among other things. In many ways, I’m surprised they didn’t tap him – all three Transformers movies are big, spectacular, lots of special effects, playing with a franchise created elsewhere and made lots of money. In some ways, he’s the more logical choice – he has the experience with doing that kind of film.

Okay, I’m obviously not a big Michael Bay fan. But plug in someone else as well (who I don’t like) such Roland Emmerich who also has experience with big special effects laden money making films like (gawd help me) Independence Day, 2012, The Patriot, Godzilla (the remake) and so much more. What would an Emmerich Avengers film have looked like?

If you subscribe to the artistic widget theory then these guys could have made The Avengers and it would have made money. Would it have made the kind of money, however, that Whedon’s version is making and, more to all of our fannish hearts, would it have been as good? Would it have been such a quintessential Marvel story? I don’t think so. I have relatives and friends who aren’t fan geeks like most of us and they’re going back to the film and seeing it more than once because they just plain enjoyed it so much.

Why? Because whether they know it or not, it’s a Joss Whedon film, a Joss Whedon story. We who know his work can see it all over the place. The respect and power of the female characters in the story. The traditional Marvel tropes (heroes meet heroes, don’t like each other, fight and bicker, and then come together) done RIGHT. The clever dialogue, insightful characterization, playing with theme that Whedon does over and over again. It’s Whedon who made The Avengers the film that we all, fan and novice alike, are really loving worldwide.

I’ll give the suits their due – they chose Whedon instead of the more logical and safer choices. Joss Whedon had never directed a film on this scale before (Serenity is great but it’s not on this scale). However, he brought a passion and respect for the source material that satisfied all of us fans and made it accessible to everyone else. There may have been some questions out in Hollyweird when Whedon was picked but there can’t be any now. He wasn’t the “artistic widget” choice; he was the right choice.