Mindy Newell: The Superman That Should Have Been 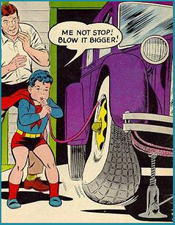 You know what they say. Moms. Can’t live without em…

In honor of all the wonderful women without whom we wouldn’t be here, today’s column is about moms. Specifically, a mom with a kid who happen to have X-ray vision, the power of flight, is invulnerable – you know.

This über-mom, is, of course, Martha Kent, nee Clark.

Martha was a country woman, wife to a farmer. She loved her husband Jonathan, but sometimes she wondered why she married him. The guy never wanted to go anywhere. He had been in the Army and already “seen the world.” Martha read the travel section of the newspaper and dreamed of Paris. They didn’t have any kids, so “the world’s our oyster,” she would tell him. Metropolis was about as far as he would go. Then one day, literally out of the sky blue, a baby boy crashed (also literally) into their lives. Martha’s husband wanted to take the kid to the police, but Martha took just one look into those baby blues and she was hooked. “Uh-uh, Jonathan,” she said to her husband. “We’re just going to mosey on down to the local orphanage, give the kid to them, and come back a few days later to take him home. That way nobody will question how we got a baby when everybody knows in this one-horse town I can’t have one. Sheesh, you can’t pass gas after Sunday dinner without old man Corsino telling everybody in church the next week.”

So that’s what they did. They were lucky nobody else wanted the kid.  (Now that would have been a whole ‘nother story – probably the “imaginary” kind.) In between they went over to the next town where there was a Babies ‘R’ Us and bought a crib and a changing table and boxes of Pampers, the start of going into parenthood hock. They decided to name the kid Clark, ‘cause that was Martha’s maiden name, and also they wanted the boy to be made fun of by all the other kids in school ‘cause Clark is such a dorky name.

A few months later Martha was vacuuming – Jonathan did the laundry, so it was a fair exchange – and went to move the couch, where all the dust bunnies lived. Baby Clark wanted to help mommy, so he picked the couch up. Martha went to the liquor cabinet and poured herself a stiff one.  When Jonathan came back from the lower 40 for lunch, he found an empty bottle of Johnny Walker Red and his wife in a drunken stupor. When she came to she had a hell of a headache and a hell of a story. Jonathan called Doc Newman who told him new mothers are under a lot of stress and to just take it easy with her. The doctor then hung up and called his wife and told her that Martha Kent was nuts.

Mrs. Newman called the Women’s Bible Study Group. At the next meeting Martha wondered if her Arrid Extra Dry had given out, ‘cause everybody was treating her like she had the bubonic plague or something. Except for Mrs. Lang. “I know just what you’re going through, Martha,” she said. “Sometimes I just want to take Lana and throw her out the window.” She gave Martha the number of her psychiatrist and some of her Xanax.  “Just to tide you over until you get an appointment with him, Martha. You’ll love him. The man is simply amazing.”

Martha went home and told her husband that he had a big mouth. Then she said, “I’m going to prove it to you.” Over Jonathan’s objections she woke up Clark, who started crying. She put him down next to the couch. Then she got out the vacuum cleaner and started cleaning.

“C’mon, Clark,” she said to the screaming infant. “Show Daddy how you helped Mommy yesterday.” Clark kept crying, dirtied his diaper and did not cooperate.

By the time Clark was in kindergarten Jonathan had apologized to Martha a million times for not believing her and had even taken her on a trip to Paris to make up for it – bringing Clark along of course, because where the hell could they find a babysitter for a kid who flew? Jonathan wanted to home-school Clark, but Martha said the kid needed “socialization.” Anyway, she got a job as a teacher’s assistant to keep an eye on him.

When Clark was in high school Jonathan didn’t want him to play any sports because he said it would be “unfair,” but Martha told him to shut up and told Clark to go ahead and try out for the football team. “Just don’t score too many touchdowns,” she said. “And let yourself get tackled once in a while.” When the other mothers wanted her to sign a petition banning football because it was “too dangerous,” she told them that football was as American as apple pie. Martha was very proud of Clark, but he had a crush on Lana Lang, who was the daughter of Mrs. Lang. Martha had never forgotten how Mrs. Lang had run around telling everybody that Martha refused to go to her shrink.

So Clark and grew up and became Superman, the Man of Steel, the hero of the world, the embodiment of the American dream of justice for all.

And he owes it all to Mom.