EVIL FEARS ‘THE STING OF THE SILVER MANTICORE!’-NEW FROM PRO SE! 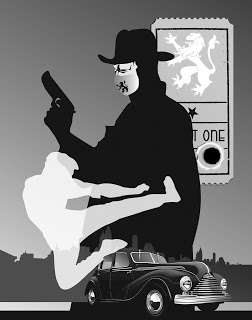 Pro Se Productions, a leading Publisher of New Pulp, proudly announced today the release of its latest novel which features the book length debut of a character featured in two recent issues of Pro Se’s Award Winning Magazine, PRO SE PRESENTS.  Written by author PJ Lozito, Pro Se’s 12th novel, THE STING OF THE SILVER MANTICORE, takes New Pulp by storm today.
“The Manticore is already a fan favorite,” Tommy Hancock, Partner in and Editor-in-Chief of Pro Se, stated.  “An instant hit since his debut in the magazine earlier this year.   PJ’s hero has definitely struck a chord with New Pulp fans, both those interested in stories that read and feel like they were written in Pulp’s heyday and those who like new insights and twists on the old style.  Giving the Manticore and his colorful cast of goodies and baddies a full length venue to play from was not only an easy decision, it was most definitely the best place for both writer and creation to display pure New Pulp awesomeness.”
According to the book itself-
He hunts the most dangerous prey imaginable!
His mission: To fight criminals and villains who are out to destroy our society!
“Ride with Brent Allred and his mysterious assistant, Bako,
as they wage war against enemies who mock the law, but will feel its strength by
THE STING OF THE SILVER MANTICORE!
Throughout the underworld and in the halls of law enforcement,
one cry inspired fear and awe by all who hear it.
“Beware the Sting of the Silver Manticore!”
The Silver Manticore, the masked marauder wanted by the law and criminals alike, is about to undertake what will be one of the greatest adventures of his incredible career.  The Silver Manticore will be drawn into a web of suspense and intrigue that will bring him face to face with his most dangerous enemy as they begin a battle that will span decades and generations!
PJ Lozito presents a tale of action and adventure, of thrills and suspense,
setting the stage for a hero for the ages!
Featuring a stunning cover by award winning artist David L. Russell and exquisite formatting and design by Sean E. Ali, THE STING OF THE SILVER MANTICORE is destined to be a New Pulp Classic, appealing to fans of Action and Larger than Life Heroes everywhere!
Available now in print for $12.00 at Amazon and Barnes & Noble.  Coming Soon in all Ebook formats!
For more information on Pro Se Productions, check out www.prosepulp.com!