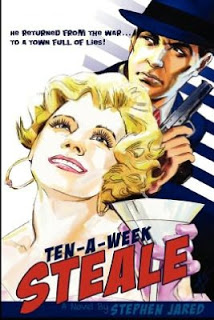 In the early 1920s, former Army Lieutenant Walter Steale has returned to civilian life and settled down in Los Angeles amongst the glitz of the silent movie world.  His one ambition is to put the horrors of World War One behind him and get on with a normal, peaceful life. Unfortunately his brother, Sam, the state’s Lieutenant Governor, coerces him into working as hired muscle for his crooked boss, Governor Davies.  This leads Steale into brutal confrontations with crazy mob gangsters and a prostitution ring tied to several corrupt politicians.
When a gang boss is murdered in a bombing and then Steale himself is targeted in another, even in his wounded condition he is savvy enough to realize he’s been set up as a patsy by his own brother. To clear his name and stay out of jail, Steale must rely on the courage of Virginia “Ginny” Joy, a beautiful young movie actress whose star is on the rise. As unlucky a couple as can be imagined, Ginny has fallen hard for the veteran doughboy and is willing to jeopardize her own career to save his neck.
Author Stephen Jared is an accomplished film actor with a vast knowledge of early Hollywood history which he deftly employs here by creating a truly authentic background for his wonderfully crafted mystery.  Refusing to mimic classical noir settings, Jared presents a truly straight forward and original narrative that moves at its own leisurely pace.  Then when the reader least expects it, he delivers scenes of gut wrenching violence in such a cold, calculating style, this reviewer was reminded of the late Mickey Spillane’s work.
TEN-A-WEEK STEALE was a nice surprise in many ways, exceeding my own expectations and in the end delivers a better than average tale in a field overrun with cheap knock-offs.  Wally Steale and Ginny Joy make a nice team, let’s hope we get to see them again real soon.
Share