MARC ALAN FISHMAN: Tales from My Art Table – The Soundtrack 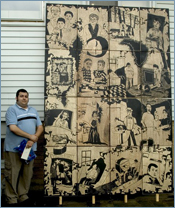 Because I no longer profess to have original thoughts, I’ve taken a liking to riffing off a topic suggested by other ComicMix columnists. This week, the lucky Ms. Mindy Newell  inspired my topic du jour. As I discussed last week, I’ve been a serious artist since high school. When I was faced with two years worth of assignments in a single school year, I was chained to the art table basically every night. My art-desk was just a dining room table, so for me the creative process started more with a mindset than a setting. An artist’s area is a second home, a place where creativity blooms and technical proficiency is honed with each successive piece. Nothing gets me into this place quicker than music.

I can point to the soundtrack of my high school days and how it lead me to the canvas… or Bristol board, or god knows what else I was drawing on. Discs in heavy rotation? Tonic’s self-titled debut was a biggie. Reel Big Fish’s Why Do They Rock So Hard was always a quick pick-me-up. Guster’s Lost and Gone Forever carried enough personal anthems that I ended up making a piece of art about it. And of course, my long-standing stalwarts – Barenaked Ladies and They Might Be Giants – were never far behind a studio session. When Matt started dating girls, leaving me wondering what the hell was wrong with me (Answer? No Beard.), I found solace in Marilyn Manson’s Antichrist Superstar and a 10-minute stint as a psuedo-goth. Oddly enough, being sad and angry all the time never worked out for the natural comedian in me. Thank Gordon for Barenaked Ladies.

During this time too, Matt and I (when he wasn’t kanoodling with the ladies) would have an occasional studio night. Generally his house. He’d bring down the boom box, plug it in, and we’d toss in some long running discs, and recreate the atmosphere cultivated in the art room at school. Dave Mathews and Tim Reynold’s Live at Luther College, Rage Against the Machine, a little Guster, and maybe Sting’s Mercury Falling… and the paint, pencils, and bonding of brothers began.

My taste in music was (and still is) pretty kooky to say the least. While I’m by no means a staunch follower of rap, metal, grunge, bluegrass, or soul music… I do have a handful of artists in all those genres that I follow methodically. Trust me, a view of my guilty pleasures list on Spotify is truly vomit-inducing to most. Unlike many of the fine folks writing here… I was right on the cusp of the shuffle generation. And while the first 18 years of my music-loving was dependent on the ‘Album,’ by college, I was picking and choosing tracks to enjoy (unless it was from a band I’d already found a love for). But I digress… This column is supposed to be about the correlation between my music and my art.

In college, I found the first medium to really speak to me – woodcut. A combination of graphic layout and meticulous process led me to an epiphany of sorts. At a piece of plywood, I found a zen-like state where I could just put my hands to a task, let music pour into my ears, and when the haze lifted, art was made. During this time, my CD player had long been ditched for a first generation iPod. All 4 GB were crammed to the brim with tracks gleaned from my own collection, and some acquired from the file-sharing sites that were all-too-popular at the time. My personal policy was to only appropriate music from artists I’d already owned something from… or tracks I liked enough to listen to repeatedly, but not support the band financially. Sorry, Dakota Moon… you’re not worth my buck.

Tunes of the time ranged from Eminem’s B-Sides, BNL’s Maroon, Red Hot Chili Peppers’ Californication and Red Hot Minute… to wuss rock from John Mayer and Ben Folds. All of them piped to my fingers, amidst a mountain of wood shavings. The art attached to this piece shows off the culmination of that work. 16 panels, 10 feet tall, 18 months worth of hard work, completed through 4,000 songs on continuous play.

Nowadays, I jump between online services that pump tunes to me on the cheap (at the trade-off of intermittent commercials), or a shuffling of my iTunes. Occasionally I’ll feel a twinge of nostalgia, and I’ll toss on Sting’s Ten Summoners Tales, and just go to town. Sadly, I’ve not done a woodcut since college… but have found a true love and calling in both graphic design, and comic book making. And nowadays when I’m not buried with freelance work, day job work, or baby and wife tending… I toss on some noise canceling headphones, crank up the shuffle, and start drawing my nights away.

And yeah, Mindy… Sometimes I listen to Glee, too.