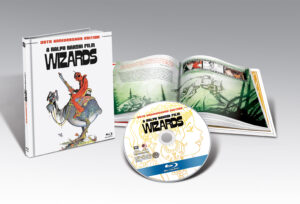 While guys like Steven Spielberg, Francis Ford Coppola and George Lucas spent the 1970s reinventing live action moviemaking, animation had just one lone figure toiling away. Ralph Bakshi, trained on Terrytoons and involved in 1960s television animation, began exploring the possibilities of animated features in the shadow of Walt Disney’s death. His Fritz the Cat made people sit up and take notice, followed by Heavy Traffic, and Coonskin – urban, funky, raw tales set in a familiar world.

After that, he set his sights on something fantastic and gave us, in 1976, Wizards. I’ve been waiting for this film to be restored, cleaned up, and released on Blu-ray given its visual artistry and fun story. Finally, 20th Century Home Entertainment has released it for the film’s 35th Anniversary and they’ve given it a handsome treatment. Encased in a hardcover case with a 24-page booklet, the Blu-ray is striking to watch.

Interestingly, it was 20th that green lit their first animated feature, Wizards, aimed at families, and Lucas’ The Star Wars at roughly the same time, considering that science fiction was not a popular genre at the time. Clearly, Bakshi wanted to make his version of Lord of the Rings, an epic myth with a deep history, various races, and a dose of magic. He once again had budgetary issues with the studio as his imagination outstrips the cash on hand and abilities of hand-drawn animation at the time. (That he went on to make his wretched version of Tolkien afterwards was just a shame.)

Bakshi sets his tale on a post-apocalyptic Earth, and tells the story of Avatar (Bob Holt), the kindly, eccentric sorcerer-ruler of Montagar, a rainbow paradise inhabited by elves and fairies. Avatar’s evil brother, Blackwolf (Steve Gravers), dominates Scortch, a bleak land of goblins and wraiths. When the power-hungry Blackwolf attacks Montagar with tanks, bombers, machine guns dredged from deep beneath the surface, Avatar, accompanied by Elinore (Jesse Welles), a spirited young woman, and Weehawk (Richard Romanus), a courageous elf, must enter the darkness of Scortch to save his world. At point, they encounter the fairies and their leader Sean, voiced by Mark Hamill, making for an interesting connection with 20th’s other SF feature.

Yes, it’s a bit of cautionary tale and the backstory isn’t presented well enough to give a real understanding how magic rose from the collapse of technology two million years ago but you go with it because it’s tremendous fun to watch. And yes, it’s clearly good versus evil with recognizable Nazi paraphernalia while our hero is practically wearing a white hat so yeah, it hasn’t aged as well as one would have hoped but you have to credit Bakshi for at least trying to do something a little different.

Bakshi had to resort to rotoscoping part of the climactic battle using footage from Sergei Eisenstein’s Alexander Nevsky when he ran short of cash and 20th wouldn’t pony up more money. It’s a precursor to his subsequent visit to Middle Earth and robs the film to a degree.

You wish meticulous restoration work was done on the film because it mars the transfer but it’s a serviceable transfer. Similarly, for a 35th Anniversary edition, some newer features would have been nice but we only get recycled bits from the 2004 DVD release including Bakshi’s fine commentary and Ralph Bakshi – The Wizard of Animation Featurette. You get the trailers but better, you get Still Galleries letting you admire the design work from British illustrator Ian Miller and comic artist Mike Ploog who did the character designs and backgrounds. There’s some Bill Stout work as well, including the disc cover, and the late, great Vaughn Bode’s work was an obvious source of inspiration.