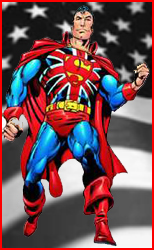 Well, I suppose it was inevitable.

After all, the American Nazis objected to Heimdall being played by a black man in last year’s Thor movie. To swing 180 degrees in the opposite direction, many Asian groups objected to the casting of a European in the role of a Eurasian in the play Miss Saigon. They felt that the part should have gone to an Asian and not to a Eur.

There are numerous examples of this, and some attracted justifiable outrage. I’m not too certain about the Miss Saigon thing: the character is Eurasian but Asians are woefully underrepresented on western stages. The Thor thing is just completely stupid: Heimdall is Asgardian and not Teutonic, and the American Nazis are assholes.

Several thousand white actors have been cast as American Indians in several hundred (at least) motion pictures, and that’s simply wrong. We should have grown out of that, yet for the past several years I’ve been involved in a comics project that stars an American Indian lead but has been “unsellable” to Hollywood because they “can’t find” an acceptable American Indian actor. Besides, there are none who could carry a movie.

So I’m not surprised to see the beginnings of … let’s say discomfort … at the casting of a British actor in the lead role of this summer’s Man of Steel. Truth, Justice, and the American Way, right? Superman lives in Metropolis, which is in or near Kansas, and you can’t get more American than that, right? Hollywood is pushing its internationalist agenda down our throats again, right?

Well, no. That’s not right. Superman is not American, he’s Kryptonian. Clark Kent is American, but he’s not the guy referred to in the title Man of Steel. Clark Kent is a disguise. Kal-El is Superman, and he wasn’t born here.

In fact, he’s an illegal immigrant.

I don’t get bent out of shape over characters not being portrayed by actors of the same nationality or race. It’s called “acting.” Look it up in the dictionary. Should only white people be cast as characters originally conceived as white people? Tell that to Jeffrey Wright. James Bond wasn’t born in Scotland, but Sean Connery was. Johnny Depp is playing Tonto, and that’s just too weird to be right or wrong.

And Kabuki? Hello – men playing all the female roles? Orson Welles cast himself in the lead role in Othello and then he cast black actors in all the other roles in Shakespeare’s ditty, and then they performed Othello in Harlem!

The fault of extremist thinking on both sides is that people jump at the symptoms and ignore the issues. The real issue is the underrepresentation of minorities in our media, and that’s an issue that is slowly being addressed. Should we never make a Charlie Chan movie ever again because white actors had played the Hawaiian detective, most notably a performer from Sweden. But nobody complains about the current incarnation of Hawaii 5-O even though the two Hawaiian detectives in that show are played by actors of Korean descent.