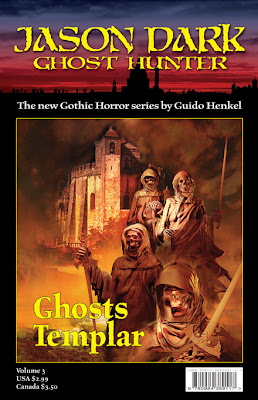 Even though this novella is Guido Henkel’s third outing with his now trademark Paranormal Investigator Jason Dark, GHOSTS TEMPLAR stands out as the perfect storm for not only Henkel’s talents and imagination, but is also the pinnacle example of a moody, gothic Victorian revenge ghost story.
Dark and his ever enticing, extremely interesting partner Siu Lin are asked by a newly promoted Yard Inspector by the name of Lestrade (yes, that one, Pulpsters!) to look into the disappearance of a constable in a small town.   Of course for Dark to be involved, there has to be more than just an absent human.  Such as a band of phantom knights appearing each night and killing people.  Not randomly murdering the masses, but instead handpicking their victims and gruesomely dispatching them.   Dark and Siu Lin stumble onto not just a missing persons case nor simply a ghost story, but a quest that will lay souls, both living and dead either to rest or damn them to Hell forever.
Although the first two Dark novellas are excellent in their own rights, GHOSTS TEMPLAR proves them to be nothing but setting the table for the right blend of horror, mystery, tension, intrigue, and character development.  Henkel’s use of Lestrade as a catalyst even adds a depth to that literary figure that he doesn’t often get elsewhere.   Dark is at his moody, masterful best and Siu Lin blossoms completely into a fully realized character and one who more than holds her own in a series focused on her mentor.
Not only do we get a full rendering of the characters we’ve now followed through three volumes in GHOSTS TEMPLAR, but Henkel provides us with an intricate, beautiful canvas which he wraps both characters and readers in.  The descriptions of the village and particularly one particular area where much of the story actually is revealed are haunting and definitely had an impact.   Henkel captures the atmosphere, the strangling, almost choking presence of evil and the desperation of good to overcome in wonderful, wonderful ways, in everything from how the ghosts in question carried out their killings to the way the village unfolded with every descriptive word from Henkel.
FIVE OUT OF FIVE TIPS OF THE HAT-  One of the best novellas of its type or possibly in my top best of novella list ever.   Can’t use enough Terrifics to describe this.
Share