HANCOCK TIPS HIS HAT TO ‘THEATER OF VAMPIRES’! 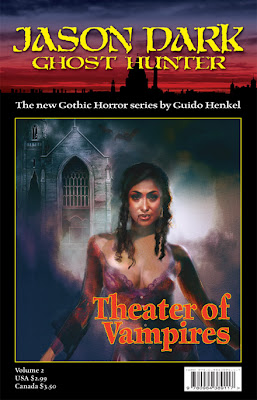 I’ll admit that I’m usually (with a few exceptions) an easy reviewer of initial books in new series.  And there’s a few reasons for that, but that doesn’t mean my praise on the first volume is false, it isn’t at all.  The true strength, though, for me in a series is not simply how good the first book is, but if the second book in the series meets or exceeds my best thoughts of its predecessor.  That’s how I gauge whether or not I’m going to stay with a series for awhile.


Guido Henkel’s THEATER OF VAMPIRES, the follow up to DEMON’S NIGHT and the second in the Jason Dark series definitely set the hook I’d already swallowed with the first volume.


In this adventure, Investigator of the Supermatural Jason Dark and his now apprentice/partner Siu Lin (one of the best parts of the first book) set out to investigate killings that may center around a theatrical production new to England.   This extravagant, wildly weird stage show, considered an example of Grand Guignol, is allegedly about vampires and how they feast on humans.  When Dark becomes concerned that reality may be stranger than staged fiction and a real threat might haunt the aisles and back stage of this production, he and Siu Lin turn to one of Dark’s old friends and jump neck first into the bloodiest, boldest adventure yet.


It’s a foregone conclusion with this book that Jason Dark will encounter something monstrous, something supernatural. As a matter of fact, that point is driven home even more in this volume due to a certain Doctor spying Dark at the Theater and imploring that Dark visit this Doctor and his ‘friend’ soon, a friend who, though in the same field as Dark, did not believe in the supernatural, only in the logical.    Henkel fantastically weaves a believable world in his own version of Victorian England, even sprinkling it with real and fictional personages.   One of the neatest is Dark’s inventor friend, Herbert, who although he doesn’t appear in this volume, casts a long enough shadow that I have a fair idea who he is.    Combine this wonderful name dropping with Henkel’s horrifying descriptions, crackling dialogue, and excellent pulpy pacing and THEATER OF VAMPIRES is an excellent second chapter in the literary life of Jason Dark


FIVE OUT OF FIVE TIPS OF THE HAT-Wickedly fun.