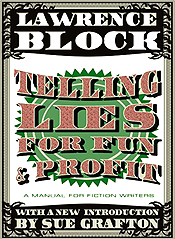 What goes into making a memorable character for a story?

According to Lawrence Block, author of over one hundred novels and recipient of the Grand Master award from the Mystery Writers of America, they must be three things: plausible, sympathetic, and original.

I think that’s a damn good definition of what makes a character real. Except that I think Mr. Block used the wrong word. It’s not “sympathetic,” it’s “empathetic.” Now, sympathy and empathy are kissing cousins, but sympathy, I think, allows the individual to separate from the character just a bit, to feel for the character while still allowing for some separation – six degrees of separation, if you will. Empathy, on the other hand causes the individual to feel with the character– it’s the recognition of self in someone else.

Without that recognition, without that empathy, the character is in danger of falling flat, of eliciting a “who cares?” response. The great characters are empathetic – Scarlett O’Hara of Gone With The Wind, the Joad family (especially Tom and “Ma”) of The Grapes Of Wrath, Vito and Michael Coreleone of The Godfather, Caleb Trask of East Of Eden, Joe and Kirsten Clay of Days Of Wine And Roses, Norma Desmond in Sunset Boulevard, King George VI in The King’s Speech.

In comics there is Alan Moore’s Swamp Thing, Neil Gaiman’s Sandman and his sister, Death, the X-Men’s Max Eisenhardt/Erik Lensherr/Magneto and Jean Grey/Phoenix (Dark and “Light”), Peter Parker/Spider-Man and Mary Jane Watson, Selina Kyle/Catwoman, and Sue Storm/The Invisible Woman. Of course there are more; I just chose those characters that appeared at the top of my head as I write this. You will have your own characters that engender empathy.

Originality is hard.  The history of storytelling begins when our ancestors first sat down around the fire and told tales to ward off the dark night. The history of storytelling is ripe with heroes and villains, love and betrayal, valor and cowardice. Originality, I think, comprises the total picture. As Block says in his book Telling Lies For Fun And Profit, “it’s not the quirks that make an enduring character, but the essential personality which the quirks highlight.” In other words, and like I said, it’s the whole picture, the complete character or individual that makes him or her an original.

Norma Desmond’s quirk is her inability to adjust to age and talkies, to realize and accept that time, and Hollywood, has marched on. Tom Joad’s quirk is his inability to accept injustice, even if it causes him to murder, which he sees as no injustice. Vito Coreleone’s quirk is to see the world as an “us against them” scenario, to nurture the family while attacking the world. Michael Coreleone’s quirk is to talk of love and loyalty to the family while he destroys it.  Swamp Thing’s quirk is that he is a plant trying to be a man. And Death loves life, even as she takes it away.

Plausibility allows the reader to suspend his or her disbelief, to accept that the actions of the character are true and real and acceptable. Now in comics, of course, plausibility is a two-edged sword. Of course we know that nobody can fly; nobody is invulnerable or runs at supersonic speed; no one can turn invisible or survive the explosion of a gamma bomb (except Bruce Banner, of course!) But as readers of superhero comics, we willingly suspend our disbelief, the implausibility of the character, before we even open the book. Why? Well, I think it has something to do with the capturing of our imagination, the “what if?” factor that I wrote about several months ago. But I also think that the other factors mentioned above play a role in our acceptance of Superman or Rogue. Empathy: “I get it. I know what it’s like to be Rogue, to be unable to really touch someone, to really get close to someone.” Or “Yeah, sometimes I feel like Kal-El, a stranger in a strange land.”

I watched Game Change on HBO. The movie is based on Game Change: Obama and the Clintons, McCain and Palin, and the Race of a Lifetime, by John Heilemann of New York magazine and Mark Halperin of Time. Both men are seasoned politically analysts, and their book, which was released on January 11, 2010, is an inside look at the Presidential campaign of 2008. The HBO movie focuses on Palin, played by Julianne Moore, from the moment the McCain campaign decides to ask her to be his running mate to Obama’s running mate.

The movie is riveting. Moore buries herself completely into the role, and I’m guaranteeing right now that she wins an Emmy for her performance. Sarah Palin is, without a doubt, love her or hate her, an original. She is empathetic – and sympathetic – as she works to maintain her sense of self and, love them or hate them, her own beliefs against the McCain and Republican political machinery.

But is she plausible? The movie shows that, as far as being capable of being “one heartbeat away from the Presidency,” Palin was an implausible candidate. But don’t tell that to the huge – and I mean huge – groundswell of love and support she engendered.

Yesterday afternoon I went to my local comic book store, Vector Comics, to pick up my haul. Joe and Tina, the terrific and wonderful owners of the shop, were busy with other customers, so I browsed through the stacks to see if anything not on my list that caught my interest. (Actually, almost everything piques my appetite, and if I allowed myself to buy everything I want, I couldn’t pay the rent!)

Know what I found? The Sarah Palin comic from Bluewater Comics.