HANCOCK TIPS HIS HAT TO ‘DEATHWALKER’! 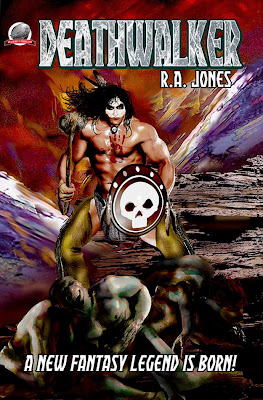 It is always exciting when a  New Pulp character debuts.  It’s also a great thing when writers, especially those known in other mediums, make their way into the New Pulp field.   In the instance of this Airship 27 release, DEATHWALKER, both of these events have occurred.  Deathwalker, the central character of the book, is the creation of R. A. Jones, a writer known largely for his comic work.  This is one of two New Pulp works that Jones has had debut in the month of February.

But there’s a third neat occurrence that I like to see happen as well that DEATHWALKER also takes advantage of.

In DEATHWALKER, Jones mines a field of inspiration and creativity that I think we as New Pulp writers all too often either completely overlook or just steal bits and pieces from intend of wrapping ourselves in it whole cloth.  That is, the rich tapestry that so many ancient civilizations, religions, and mythologies offer to creators to draw stories and new adventures from.  Why more New Pulpsters aren’t stepping off into the catastrophic cacophony of myths and the screwed up creatures that inhabit them is a mystery to me.  Jones does not shy away from that at all, setting his entire tale squarely in Native American mythology, particularly that of the Cheyenne, Deathwalker’s tribe.

The story centers around the title character who, when he was known as High Bird, experienced a rite of passage common to many aboriginal races world wide, that of the vision quest.  In his fevered quest, High Bird is visited by Death itself and marked forever more to be a Hero, but also a Bringer of Death.  It will follow him, He will cause it, He will be surrounded by it, respected because of it, and feared for it even by those who love him.  Taking the name Deathwalker, he becomes the leader of the Dog Soldiers, a band of warriors within his tribe and serves in many ways as the protector of his people.

The action of the story erupts when a band of young Cheyenne braves steal ponies from a nearby Pawnee tribe.  The shaman of the Pawnees, Stands Alone, takes great offense to this and begins a quest to wreak his revenge on the Cheyenne.  Never one to back down, Deathwalker confronts the shaman, heaps a few insults on to the old man himself, and thus begins a war between the two men that involves wolf men, centaurs, flying pestilence, snake women, and so many more concepts and characters drawn straight from Native American beliefs.   Not only that, but Jones insures that his characters authentically use rituals and observe customs common to the featured tribes, even so much so that one such custom plays a pivotal role in the story’s resolution.

DEATHWALKER has a lot to offer.  It is peopled with realistic characters while also being filled with fantastic magic and awesomely conceived mythical beasts.   Although the story telling is ponderous toward the beginning, it quickly gets beyond that and rolls fairly nonstop until the last page.  Also, there’s a device used toward the end of the book that sort of distracted me, took me out of the flow.   But overall, it was a solid read and fantastic story.

The interior art by Neno (that I was able to see in the PDF copy I had) stood out and was a fantastic rendition of the action in the book.  The Laura Givens cover was a mixed bag for me.  The central figure of Deathwalker was striking, but the surroundings and whatever lay in front of him seemed muddled and less clearly defined.    The overall design of the book, however, is top notch and makes a great package.

DEATHWALKER has been called ‘a Native American Conan’.  I don’t think that’s what I read.  The central character here had a code of honor and a direction much more specific and inherent than Robert E. Howard’s barbarian.  This struck me more as a Native American Hercules or Perseus and the story flowed with a more traditional Greek or Roman mythological pacing as well.  But, that is no way a negative at all. I actually find the depth that Jones worked into this tale its strongest point.

FOUR OUT OF FIVE TIPS OF THE HAT-DEATHWALKER runs the gamut of well told, fast paced, great mythological fun!  Well worth the read!