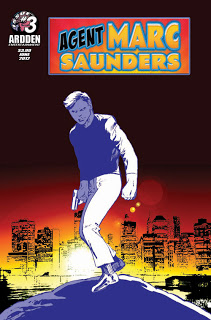 It was inevitable.   Sweden’s very first superhero, Agent Marc Saunders, the story of an American agent fighting the forces of evil worldwide, has finally reached the United States!
Teaming up with Serieplaneten, the original Swedish publisher of the hit comic book series, Ardden Entertainment, the publisher of Flash Gordon and Casper and the Spectrals, among others, is proud to bring this amazing new character to American shores.

Before Marc Saunders, Sweden never had a seriously meant superhero title of its own. There was “Dotty Whirlwind” back in 1945 – 1946, but she never carried her own book.

Until 2011, when writer/artist Mikael Bergkvist created Agent Marc Saunders.  A cross between James Bond and Doc Savage, Saunders is a super-powered agent working for the American government, facing a series of increasingly brutal enemies with bigger and bigger plans for destruction and mayhem.   Saunders is aided by his trusted team of allies, including the beautiful media tycoon Marion Gold. This series has been embraced by Sweden, largely due to its classic pulp type of adventure, like “The Shadow” or “Doc Savage”, but set in in modern times. 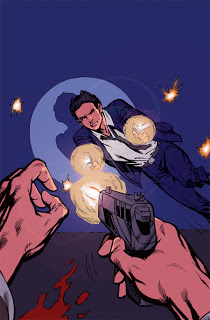 Issue #1 of the American version of Agent Marc Saunders comes out in April and is currently available for order through Diamond Comics.  It features a cover by none other than the legendary Neal Adams!

Mikael Bergkvist has been writing comics for 25 years but Agent Marc Saunders is his first original creation.

Serieplaneten, an up and coming comic publisher in Sweden, publishes the Swedish version of “The Simpsons vs Futurama,” among other titles, and in 2011 they began publishing Marc Saunders, making Swedish comic book history in the process.