DENNIS O’NEIL: Who Watches The Wackies? 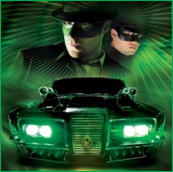 “…and I’d also like to thank the guy who parks my car on Wednesday nights and the waiter at the Chinese restaurant we ate at last month and, oh, I almost forgot – forgive me – the young mom with the wild mane of reddish hair at the deli counter yesterday, oh lordy, she was gorgeous! And who else? Mr. Electricity Man who puts the electricity through the wires so my television set can light up with pictures and stuff and…”

On the subject of the television: the one that’s in the room above my head will, within the hour, be colonized by show-biz elite because this is the magic night when my sweetie and I part video-viewing company. She’ll be watching the Academy Awards and I’ll be…doing something that isn’t watching the Academy Awards. Why? Well… I feel consternated by mountain-size helpings of glitz and besides, no superhero movies are up for any of the prizes. (Those Hollywood philistines! Didn’t they see The Green Hornet?)

Though the red-carpet trodders do have things in common with superheroes. For openers: costumes. Listen, I’ve been to Hollywood – I’ve even been to three movie studios – and people don’t wear stuff like that on the street. Just as Batman only dons his cape and cowl on certain occasions – often involving dark rooftops and maniacs – these performers apparently wear their special finery on ceremonial occasions – maybe only this ceremonial occasion – and then shed it and put on, you know, clothes. And the wearing of it doesn’t even please everyone: expect the snarkfest to begin late tonight and continue through tomorrow’s cable news cycle: eyebrow archers who probably have AFTRA union cards commenting uncharitably on couture, coiffure, décolletage, footwear, anklewear, wristwear, neckwear and, if someone is just a tiny bit daring, even underwear, providing all the glorious entertainment of hearing a couple of preadolescents discussing the best looking child in the seventh grade who, of course, isn’t them.

Costumes not enough? Then add masks. Oh, not the kind of masks you wear on Halloween, nor the kind that Catwoman and Spider-Man wear to work (unless one of the trodders decides to make a Fashion Statement and harvest really major snarkery.) The masks I refer to are not donned, they’re applied with brushes and pencils and powder puffs and fingertips and…I don’t know…trowels?

Like our superheroes, these actors have something to hide – insecurity? pimples? – and I don’t think we see them at their best on Oscar night. Weirdly enough, we do see them at their best when they’re most hidden – when they’re saying others’ words and, in some cases, even mimicking others’ gestures. When they’re doing their jobs. That’s how I like to enjoy them, how I like to remember them, as wonder workers who can, however briefly, transform my world and maybe and brighten my existence for the two hours I sit in darkness.

My pick? I thought you’d never ask. I gotta go with The Artist. By the time you read this, we’ll know if I’m right. And you can do me the favor of not giving a damn.