HANCOCK TIPS HIS HAT TO BPRD: BEING HUMAN! 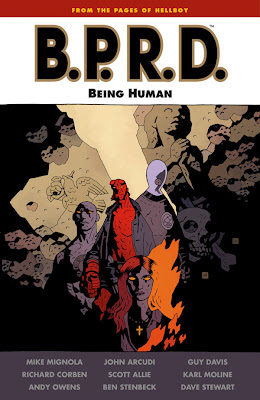 I’m a Hellboy Fan.  Probably not as well read as most, but a fan nonetheless.   Hellboy is a kind of visual Pulp that excites the senses for a variety of Pulp fans-Horror, mystery, fantasy, adventure, and on and on and on.   Although the quality of stories has varied at times, one thing remains true.  A Hellboy related Tale is never ever without weirdness and adventure.  Never.
The same holds true for the stories found in ‘BPRD: Being Human.’  There’s haunted woods, zombie plantation owners, werewolves, spirit eating demons, and that’s just the bad guys.  Although Hellboy makes an appearance, this collection focuses on other members of the BPRD and each story ties very strongly into the title of the collection.
This book is about the aspects of humanity that some members of the BPRD feel like they don’t have, others feel like they don’t deserve them, and still others are desperate to have some sense of humanity.   In that, the book hits home.  Each story, there are four, clearly illustrates just how human the strange beings that work with or alongside the BPRD actually are and how maybe the humans around them could take lessons.
The art is stunning as usual.  Creepy, under your skin, making you study the shadows to see what might jump out at you.   Overall, the collection is solid.  The werewolf story is probably my favorite as it conveys its point amongst a ton of action in a very few pages.  The  Roger the Homunculus story started off strong, but didn’t really have a resolution that lived up to the beginning.  The other two stories were usual fare from the Hellboy realm, which means they were pretty solid.
FOUR OUT OF FIVE TIPS OF THE HAT-  The book made its point.  And did it with spooky art and fairly strong storytelling.
Share