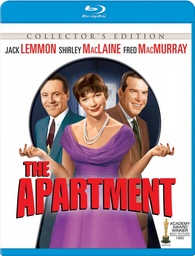 Every now and then, we here at ComicMix like to look at books and movies beyond our normal pop culture purview to examine people who helped build the foundations of modern storytelling. We were reminded of this when 20th Century Home Entertainment sent us a Blu-ray edition of The Apartment for review. This 1960 release, out now, won five Academy Awards including Best Picture, and is a brilliant assemblage of director, performers, and story.

The movie comes from Billy Wilder who directed, produced and co-wrote the screenplay (with I.A.L. Diamond) and  is a bit of settling old business. Back in the 1940s, he wanted to deal with adultery but the Hays Production Code forbade that so he finally got his chance in this story, partly inspired by Noel Coward’s Brief Encounter.

The story features Consolidated Life Insurance’s C.C. Baxter (Jack Lemmon), who has been lending his conveniently located apartment to his superiors — Dobsich (Ray Walston), Eichelberger (David White), and Vanderhoff (Willard Waterman) — for clandestine affairs. His generosity has resulted in a variety of undeserved promotions that brought him to the attention of company president J.D. Sheldrake (Fred MacMurray) who now wants to use the place to bed elevator operator, and object of Baxter’s affection, Fran Kubelik (Shirley MacLaine). The film then explores how Lemmon can win the girl without losing his job while regaining his sense of dignity.

The movie itself does a nice job puncturing the veneer of corporate America where the men in gray flannel suits were not necessarily working as hard as we were led to believe. The film is a romantic comedy but one with a 1960 edge that is brought to life with razor-sharp dialogue and powerful performances by the leads, aided and abetted by a strong supporting cast. While Lemmon was always a terrify Everyman, MacMurray reminds us he was more than the lead on My Three Sons, and turns in a nuanced performance. Still, the heart of soul of the film is MacLaine whose low-level employee just wants to be loved.

Set during the holiday season, it’s a time for magic and the end of a year with hope for a better new one. Unlike today’s rom-coms that are neat and tidy, this one is filled with sardonic humor, pathos, tears, and some genuine emotion that has you rooting for the would-be lovers.

Overall, the movie looks good but is not a perfectly restored one but you will appreciate the upgrade while the film’s sound is solid. There are a few extras, notably some interesting commentary from Film Historian Bruce Block. A nearly 30 minute featurette,  “Inside The Apartment” is a previously scene piece that explores Wilder’s amazing career. There’s also “Magic Time – The Art of Jack Lemmon” a 12 minute piece narrated by Lemmon’s son Chris.

We can’t urge you strongly enough to seek out Wilder’s work if you’re unfamiliar with it and if you’ve never seen this one, now’s the time.