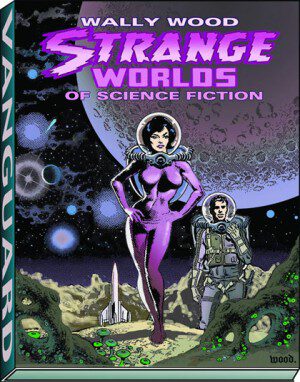 A friend of mine owns the original art to a page of what he (and I) consider the zenith of Wally Wood’s creative genius, “The Mad ‘Comic’ Opera” (MAD #56, July 1960, written by Frank Jacobs). It is a lush piece of work, a cartooning tour de force that causes wide eyed disbelief on the printed page and gasps of astonishment when viewed in its larger, original form. “The Mad ‘Comic’ Opera” is an amazing moment in time, a moment that offered Wood a piece of work which allowed him to show off everything he had learned in his preceding dozen or so years as a comic book artist.

There is not a false note or creative misstep in a single panel of this six-page feature, not in layout or story telling, not in his use of Duotone to bring depth and dimension to the black and white page, and certainly not in his ability to do pitch-perfect parodies–albeit as “real people”–of the comic strip characters populating the story The operatic death scene of Dagwood Bumstead alone would have been enough to cement a lesser artists’ reputation; in the hands of Wally Wood, it was just one panel among some three dozen bits of perfection.

Wally Wood may never have been better, and, in his later and sadder declining years, he often operated at a level that was, in comparison to “The Mad ‘Comic’ Opera,” heartbreaking but which, viewed on their own, were still better than three-quarters of what anybody else was doing. It is also no secret that Wood frequently employed assistants and ghosts to help him turn out the volume of work he produced, but their use was no concession to quality or creative control. As Michael T. Gilbert wrote in the article “Total Control: A Brief Biography of Wally Wood” from Alter-Ego Volume 3, #8, “In the ’50s he mainly worked with Joe Orlando, Harry Harrison, and Sid Check. In later decades he was assisted by Dan Adkins, Ralph Reese, Wayne Howard, Larry Hama, and Bill Pearson, to name a few. No matter. The end result was unmistakably Wood. Helpers or not, the quantity and consistent high quality of the pages were unbelievable. He was always in control of the final product.” 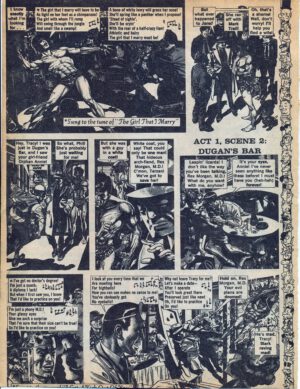 I can’t tell you when I first became aware of Wally Wood’s art. It could have been from his run on the early issues of Daredevil for Marvel (Daredevil #5 – 11, December 1964 – December 1965), or his T.H.U.N.D.E.R. Agents (debuting in 1965) for Tower Comics, or, most likely, from the 1960s paperback reprints of his brilliant output for MAD (beginning in MAD #1 in 1952 and continuing through the early-1960s). I was certainly well aware of his work–if only yet vaguely aware of his reputation–by the time the first issue of DC’s action figure tie-in comic Captain Action landed on the stands in the summer of 1968. And the first Wood-work of repute usually mentioned in the late 1960s would have been his contributions to the legendary science fiction titles published by Bill Gaines’ E.C. Comics.

But talent like Wally Wood’s didn’t (couldn’t!) spring up overnight, not in the case, as I’ve said, of “The Mad ‘Comic’ Opera” and certainly not in a body of work like his output for E.C.’s Weird Fantasy, Weird Science, Incredible Science Fiction, and other titles. For the latter, Wood had scores of humor pieces for MAD over an eight year span on which to hone his satiric chops; for the former, he would call upon what he had learned laboring for a relatively short two or three years in the fields of lesser publishers than the obsessive and visionary Gaines.

Joe Orlando, Wood’s friend and collaborator, once said, “What Star Wars was to science fiction movies, Wally Wood was to science fiction comics.” The truth of that statement is visible in every page of his oft-reprinted E.C. tales. What readers and fans haven’t been privy to were the stories that preceded his stint at E.C., the tales he produced (mostly) during 1950 and 1951 for science fiction comics published by the likes of Avon Publishing, Ziff-Davis, and others. J. David Spurlock’s Vanguard Publishing has rectified this oversight with Wally Wood Strange Worlds of Science Fiction, available in both hardcover and trade paperback editions.

Strange Worlds features twenty-one of Wood’s pre-E.C. Comics stories, most published in their original “historic color, bad registration and all,” according to Spurlock, Vanguard’s publisher and editor (as well as co-author of the biography, Wally’s World: The Brilliant Life and Tragic Death of Wally Wood, The World’s Second-Best Comic Book Artist, with Steve Starger, Vanguard Publishing, 2006). To say that the quality of the scripts the young artist was handed to illustrate did not come up to the standards of what he would later be asked to draw at E.C. is a major understatement. With rare exceptions, circa-1950 comic books stories of all genres were bland, uninspired things aimed at an eight-year old audience looking for a few minutes of disposable four-color excitement and distraction. About the only way to elevate any of these stories, whether science fiction, superhero, or romance, was through superior art.

The twenty-something Wally Wood seemed, from the start, to be among those determined to do the elevating. The raw talent and innate understanding of the workings of the comic book page that would inform his later “Wally Wood’s 22 Panels That Always Work!!!” (twenty-two separate panels of dashed-off examples of essential storytelling, compiled by Wood-assistant Larry Hama, which remains the best basic primer for comic artists ever produced) is visible from 1950’s “The Flying Saucers: Spawn of Terror,” straight through 1953’s “Rocky X of the Rocketeers.” While many of these stories lack the polish of Wood’s later work, that awkward panel or poorly rendered figure will more often come right before or after one that shines with the potential that would explode into full bloom just a year or two later at E.C. The imagination that would be the hallmark of that later work is visible from the get-go, both in his designs of alien creatures and of those unmistakably and impossibly sleek rocket ships and hardware. Wood’s aliens oozed menace and slime. His rockets glistened and gleamed in reflected light and not even the poor registration of the base sixty-four color palette of the era could dim that light.

The evolution of Wally Wood’s talent is visible in the course of these stories, arranged in chronological order of their publication, including a few done in (credited) collaboration with Al Williamson (“Death In Deep Space,” A-1 Comics #38), Orlando (“Kenton of the Star Patrol,” Strange Worlds #3), and Frank Frazetta and Williamson (“The Invasion From the Abyss,” Strange Worlds #3). I suspect other hands in various other stories; some poses found in stories like “Bandits of the Spaceway” from Avon’s Space Detective #1, are so un-Wood-like that it’s difficult not to wonder but, as Michael Gilbert said, the finished product was, ultimately, always under Wood’s control.

Spurlock cleverly introduces each story with the juxtaposition of a title page sporting an enlarged panel or two in black and white from one of Wood’s E.C. stories. The contrast can be startling, especially when you realize that the vast improvement in the quality of art between, say, Youthful Magazine’s “Captain Science and the Insidious Doctor Khartoum” and the far more mature and controlled style of E.C.’s “The Martians!” is the result of just a year or so between publication dates (1951 versus 1952).

Wally Wood’s life wasn’t a happy one; his struggles with depression and alcohol and the tragic end to his life by his own hand in 1981 have entered into comics lore, often overshadowing his many contributions to the field. But I choose to remember instead the artist whose body of work has assured him a well-justified spot in the pantheon of comic book greats, and the man behind the tragic lore that I was fortunate enough to learn about from first-hand sources, including my brother, who was one of the many young artists to work as one of Wood’s assistant (my copy of Witzend #1, Wood’s 1966 attempt to grab the reins of his own destiny as one of the very earliest artists to become his own publisher, comes from Wally’s personal stash of copies) and, later in my own career as an editor for DC Comics, from the artist’s first wife (of three), the wonderful and immensely talented colorist Tatjana Wood, who would often regale me stories of the ex-husband for whom she obviously never lost affection or the respect of one artist for another.

Wally Wood: Strange Worlds of Science Fiction may not collect the best of Wally Wood’s vast and distinguished output, but these dynamic and energetic early stories are still a treat and, more often than not, a joy to behold. “Wally may have been our most troubled artist,” E.C. and MAD publisher Bill Gaines once said. “I’m not suggesting any connection, but he may have been our most brilliant.” As loathe as I am to quibble with the distinguished Mr. Gaines, I don’t believe there’s any maybe about it.

Paul Kupperberg (Kupperberg.blogspot.com) writes the best-selling monthly Life With Archie: The Married Life magazine for Archie Comics, and is the author of the mystery novel, [[[The Same Old Story]]], available as an eBook on Amazon.com and Smashwords.com.