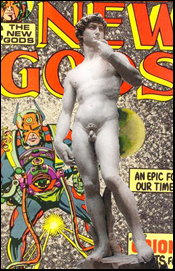 When I was a kid around 12 years old I met another kid around the same age while at the library. This was a big deal because I was black and he was white and I had no white friends, so at the time this was an historic meeting for me at the time.

We were both at the same table at the library both working on a book report. We regarded each other only with sly looks while trying to avoid eye contact with each other. I lived in a housing project and I just knew that David lived in the real nice houses that were not to far from the projects in distance but light years away in lifestyle. For about an hour we played that cat and mouse “look, don’t look” game.

We played that game until David put away his notebook and replaced them with a stack of comics that could choke a horse. I’d never seen that many comics outside of my home. Never had I seen anyone carry that many comics around.

Then I noticed something incredible. All the comics were brand new. I’ve carried comics around with me on many an occasion: grandma’s house, dentist’s office, car trip (which I only did once because I can’t read in a car; it gives me the worst headache, even now) or to a friend’s house to trade.

Whenever I’ve carried comics around, they were never a stack of new comics – never. At 12 I don’t think I’ve ever brought more than three comics at one time. Not that I didn’t want too; I just could not afford it. Now, here in front of me were at least 30 brand new comics that this snot nose white kid was showing off.

I did not want to stare but I could not help it. I was mesmerized by the wealth of comics this kid had in his possession.

I hated that kid.

I hated that I had one comic on me that had no cover.

I hated that I wanted to ask to read some of his.

At one point I remember thinking I didn’t need or even want to have that many new comics. I was also thinking David (his name was on his book bag) was stupid. He had both Marvel and DC books. Everyone knew that DC comics were crap compared to Marvel. Little kids read DC and big kids read Marvel.

Yeah, I read DC as well and they were actually my favorite but I had to keep that in the closet so as not to be thought of as a punk. I came proudly out of the closet when Kirby came to DC with his Fourth World masterpieces. Oh, Hells yes I did.

I worked myself up to this: forget this stupid white kid and his comics. I had better things to do like copying the inside of the book jacket of the book I was reading and passing that off as my report. I could give a flying fish about that kid or his darn new comics forget him and his freakin’ family, for my 12-year-old money (or lack there of) they could all go to Hell.

“Want to read some?”

My head shook yes faster than Barry Allen on crack.

David pushed the entire pile of books over to me. I thought I was going to die I was so happy. We sat there in silence reading those books until David’s mom came to pick him up. Reluctantly, I handed the stack of comics to David who asked if I was going to be at the library tomorrow.

The next day was Saturday and asking me if I was going to be at a library on Saturday was like asking a Muslim if he wants pork chops or bacon. It’s just not done.

“Give them back to me the next time you see me.” With that he and his mother said goodbye and left me there, shocked and amazed.

I thought of this story because I saw two kids this afternoon – one black, one white. They were reading a stack of comics in, of all places, a dog wash.

As I washed my dog I watched with a silent joy as they read Spider-Man and a book I’d never heard of. I often wondered if comics have the kind of magic for today’s kids as they did for my generation when I was growing up.

I got the answer to that today.

Yes, David got his books back and he and I shared an adventure together. But that, as they say, is another story.