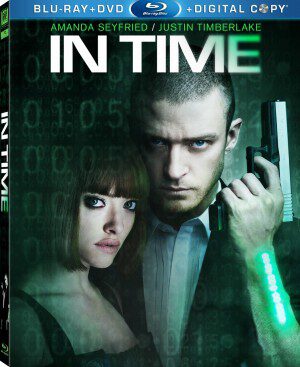 Andrew Niccol is an English teacher’s dream, presenting visually compelling dystopia in movies that feature pretty people in dire straits. While his 1997 debut, Gattaca, got us all interested in him as a visionary, he has offered up precious few films since and the most recent one, In Time, was more hard-scratching than captivating.

The Justin Timberlake action movie came and went fairly quickly in the fall and was released this past week by 20th Century Home Entertainment. In a near-future, man has figured out how to alter our genetics so on our 25th birthday, our body is locked in place and our body clock begins to countdown. If I understand it right, they have a year to live without additional time being obtained which has led to a society of the immortal haves versus the time-starved have-nots. District 1 is at the bottom of the social ladder, a slum-like environment in an unnamed portion of the United States and there, factory worker Timberlake fights back, becoming the rebel a society had been waiting for. Along the way, he falls for heiress Amanda Seyfried, who has her eyes opened to the inequity largely controlled by her billionaire father (Vincent Kartheiser). Timberlake is hunted down by a Time Keeper (Cillian Murphy) for breaking the fuzzy law.

Everything is fuzzy about the movie. The world’s economy has shifted from cash and oil to time and it can be bought, sold, traded, and stored. How that works and how the genetics work are never clearly explained. Nor is the society and why is has been divided into a dozen distinct districts (Suzanne Collins does a better job of this in her Hunger Games trilogy). The power stems from the prime district called appropriately enough New Greenwich.

Yes, this feels familiar as William F. Nolan explored this similarly in the Logan’s Run books, movie and television series.

What is hinted at but demanded exploration was how a society functions when everyone physically looks the same – everyone is 25, sometimes many times over. So, we see a variety of television stars make brief appearances including Olivia Wilde as Timberlake’s mom ad Matt Bomer as an immortal ready for death and bequeathing Timberlake with a century, who is ready to share. Johnny Galecki is the hard luck best friend who tragically mishandles his newfound time.

Timberlake and Seyfried make an attractive pair of protagonists and they run, jump, and kiss nicely enough but it’s a lot of sound fury without signifying anything. There’s ultimately too much left unexplained to make you care one whit what happens to them or their world. With Niccol writing, producing, and directing, he had no one to point out these glaring flaws.

The DVD release was sent for review and it looks and sounds just swell on a television screen and suspect the Blu-ray version looks even crisper. On the DVD, there are a ton of trailers for other films and a handful of deleted/extended scenes, none of which were missed from the film itself. The Blu-ray contains an additional featurette, “The Minutes”, and access to a game app.

There are some great ideas hinted at here but without a single one being fully fleshed out and explored, the film is an entertaining near-miss.